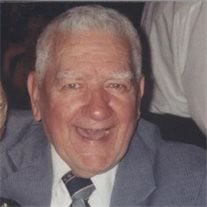 SCHENECTADY - Victor Dominick Palmo, 88, died Monday evening with his family at his side at the home of his daughter in Troy. Vic, a life long resident of Schenectady, was born on September 18, 1922. He was the fourth son of Domenico and Liberata Macarrello Palmo. He graduated from the former Nott Terrace High School in 1940 and served in the US Army from 1942-1945. He was a member of the 602nd Tank Destroyer Division fighting in France and Germany. In 1948 he joined the Schenectady Police Department rising to the rank of Captain. He served with distinction until his retirement in 1985. Vic was predeceased by his three brothers, Michael, Frank and Joseph Palmo. He is survived by his wife of 64 years, Concetta ‘Connie’ Franco Palmo; a son, Dominick Palmo and his wife Susan, of Orchard Park, NY; a daughter, Ellie DeBonis, of Troy; five grandchildren, Matthew Palmo,and his wife Amy, David Palmo, Laura Palmo, Daniel DeBonis and Michael DeBonis; three great-grandchildren, Zachary Palmo, Nathan Palmo and Victor Palmo who was born on June 20th and was named after his great-grandfather; and many nieces and nephews. Vic had many friends and enjoyed playing golf. His true passion, how ever, was his family. He deeply loved his wife and was a role model to his children and grandchildren. He showed them how to be a great husband and father by the way he lived his life. Services will be held on Friday morning at 10 am from the Rossi & Ditoro Funeral Home, Union at N. Jay Street, then to St. Anthony’s Church, Seward Place, where a Mass will be con-celebrated at 11AM. Interment with full military honors will follow in St. John the Baptist Cemetery. Relatives and friends are invited and may call at the Rossi & Ditoro Funeral Home, Thursday from 4 to 8 pm. Memorial contributions may be made in Victor’s memory to Community Hospice of Rensselaer, 295 Valley View Blvd, Rensselaer, NY 12144 or St. Anthony’s Church, 331 Seward Place, Schenectady, NY12305.

SCHENECTADY - Victor Dominick Palmo, 88, died Monday evening with his family at his side at the home of his daughter in Troy. Vic, a life long resident of Schenectady, was born on September 18, 1922. He was the fourth son of Domenico and Liberata... View Obituary & Service Information

The family of Victor D. Palmo created this Life Tributes page to make it easy to share your memories.

Send flowers to the Palmo family.