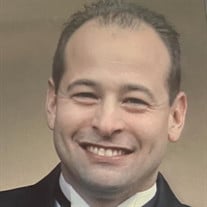 SCHENECTADY – Todd P. Ege, 55, entered into eternal peace on Thursday after being stricken at home. A second-generation German American from father Otto Karl Ege, Todd was born and raised by his Italian mother, Jennie Iafolla, grandmother and aunt in Yonkers, NY through 6th grade. He relocated with his mother and step-father, Bill Lewis to Fort Lauderdale, FL for middle and high school. Todd graduated from Rutgers, The State University of New Jersey, and Rutgers College. He earned a Master of Urban and Regional Planning from Virginia Tech University. Todd worked as a Public health Inspector for NYCDOH and Transportation planner for the NYSDOT in the World Trade Center Tower One. He relocated to Troy, for a position as a Senior Public health Inspector for nursing homes, before becoming a Project manager for the NYS Dept of Homeland Security and Emergency Services. Most recently, Todd was working as an inspector for the City of New York, in New York City. Todd was extremely intelligent, resourceful, and a great provider and protector for his family. He was their all and will be dearly missed forever. He is survived by his father, Otto and Dorothy Ege; beloved wife Maryanne Donnelly Ege, whom he married on November 12, 2005; and his loving son Gabriel Ege; brothers and sister-in-law, Tim Donnelly, Bill Joe Donnelly, and Judy Pierone; nieces and nephews, Karl, Emily, Kayla, Tabytha and Charlotte; and his fur baby Abby. Services will be held on Wednesday at 11 am at the Rossi & Ditoro Funeral Home, 501 Union St., with Fr. John Provost, officiating. Interment will follow St. Joseph’s Cemetery. Relatives and friends are invited to call at the Rossi & Ditoro Funeral Home on Wednesday from 9 am – 11 am.

The family of Todd P. Ege created this Life Tributes page to make it easy to share your memories.

Send flowers to the Ege family.