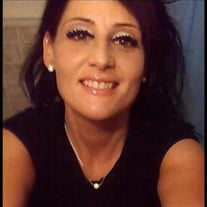 SCHENECTADY - Tisha Ann Melanson, 43, entered into the Kingdom of God on Sunday, January 9, 2022, at St. Peter’s Hospital Tisha was born on October 7, 1978, a daughter of Lori August Melanson and the late Robert Melanson Sr., who passed away on June 29, 1997. She attended Yates Magnet school from pre-k to 5th grade then Oneida Middle school from 6th to 11th grade. She later received her G.E.D then she and her high school sweetheart Jamearl Shepard welcomed their only child Akeirah Melanson-Shepard whom was born April 2nd, 1995. In 1997 she took in her younger sister, Katie after the passing of their father who lived with her until she was ready to start a family of her own. In 1997 she met her lifelong partner Carl Sammerson who is the father of her other three children Isiah Melanson (8/11/97) Jasmine Sammerson (4/4/99) and Devin Sammerson born (6/9/00). At that time she worked at WJD a telemarketing job that she loved. She was there for more than 3 years. She then worked with her sister Katie at Jackson Hewitt for the tax season becoming a certified tax preparer and then in 2005 at Clam Diggers a position she truly loved, but unfortunately, they closed. From 2006 - 2008 she worked at Blue Ribbon Restaurant. In 2005, she met her husband, Krishnoedath Bhagolie, also known as Kris or Ram, and they started their relationship that led to their marriage in 2010. Ram fondly remembers his wife as a good person, talented, hard working, and very caring. They were hand in hand, through thick and thin, every day until her last. Tisha stopped working and focused on being a stay-at-home mother, the job that she loved the most. She loved to help people, she helped anyone she could. She was caring and nurturing. Her door was always open. Everyone always turned to her for help. She was everyone’s “go-to” person. She helped friends, family, strangers off the street literally anybody. She hated to see people suffer, especially kids. Anything she could do she would. She loved all of her kid's friends as if they were her own. In 2011 she took in Jasmines best friend, Daniella who then became her third daughter. She raised and included her as if she was her own. She loved being with her children and family. In 2012 her first granddaughter was born and she continued to be a stay-at-home mom to help raise the baby so Akeirah could finish high school “NiNi” is what her grandchildren called her. In addition to Tisha spreading her kindness, she loved cleaning, gambling, and pranking people. In addition to her father, Tisha was predeceased by her step-father, Vincent Dorman who passed on January 10, 2010. Her survivors are; her children, Akeirah, Isiah, Jasmine, Devin, and Daniella, grandchildren; J’Leeyahna, Jocelyn, Cassia, Mason, Elijah, and Jae’Lani, husband; Ram, the fathers of her children; Jamearl Shepard & Carl Sammerson; mother, Lori Dorman; brothers, Nathanyel Melanson (Joshua, Noah, Jacob, Lydia, Ella) & Robert Melanson (Ayden & Evan); her only sister: Katie Saulsberry; brother-in-law, Myron Saulsberry (Gianna, Junior, Mila) Relatives and friends are invited to call at the Rossi & Ditoro Funeral Home, 501 Union Street, on Monday, January 17th from 4-6 pm. Services will begin at 5:30 pm at the Rossi & Ditoro Funeral Home with Pastor Patrick Singh, Officiating.

SCHENECTADY - Tisha Ann Melanson, 43, entered into the Kingdom of God on Sunday, January 9, 2022, at St. Peter&#8217;s Hospital Tisha was born on October 7, 1978, a daughter of Lori August Melanson and the late Robert Melanson Sr., who passed... View Obituary & Service Information

The family of Tisha Ann Melanson created this Life Tributes page to make it easy to share your memories.

Send flowers to the Melanson family.