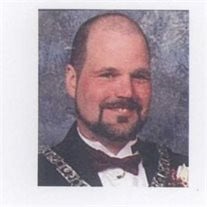 Glenville - Timothy C. Woods 49, of Bellaire Drive, passed away peacefully Friday evening June 15, 2012 as a result of a motorcycle accident. Tim was born in Schenectady on December 2, 1962 the youngest son of Thomas E. and Anna Mae Morelli Woods. He graduated from Linton High School, class of 1980. Tim worked for The Golub Corporation for 17 years and for the Niskayuna School District for the past 6 years as a Transportation Maintenance Supervisor. He was a member of the TA -Z/28 Enthusiasts car club, and the Clifton Park Elks. He enjoyed NASCAR and Autocross, where won many trophies and awards. Tim enjoyed life and people and was willing to help anyone in need. Most of all he enjoyed being a Dad. With his passing Tim's family is honored to say he is still helping others with the gift of life by being an organ donor. Tim was predeceased by his parents. Survivors include his precious daughter Mikaela Rose Woods, brothers, Michael and his wife, Nancy Woods of Schenectady, Brian and his wife, Donna Woods of Rotterdam, Dennis and his wife, Ann Woods of Glenville, his twin brother Thomas E. Woods Jr., of Bellevue, Mikaela's mother Nicole Smith, his long time loving companion Terri Costello and her children; also survived by several Aunts, Uncles, Nieces, Nephews, Cousins and an abundance of friends. The Woods family would like to thank the SICU at Albany Medical Center for the special care and attention given to Tim and especially Dr. Jones for his compassion at the time of Tim's death. Services will be held Wednesday at 8 a.m. from the Rossi & Ditoro Funeral home, Union at N. Jay Streets, and then to Good Shepherd Lutheran Church, 547 Saratoga Road, Glenville, where a service will celebrated at 9 a.m. Interment will follow in St. John the Baptist Cemetery, Schenectady. Calling hours to which relatives and friends are invited will be held Tuesday evening at the Rossi & Ditoro Funeral Home from 3 to 7 p.m.

The family of Timothy C. Woods created this Life Tributes page to make it easy to share your memories.

Send flowers to the Woods family.