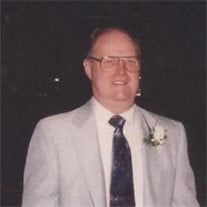 GLENVILLE – Thomas E. Woods, 81, formerly of Bellaire Drive, entered into eternal peace on Thursday at the Glendale Home. Tom was born in Schenectady on January 28, 1929, the son of the late Charles and A. Irene O’Connor Woods. He graduated from Mt. Pleasant High School, class of 1947, then honorably served in the US Navy during the Korean Conflict. Tom worked as a route driver for Utica Club Brewing Co., James M. McNearney and then Northern Distributors for 38 faithful years, retiring in 1991. He was a member of the Teamsters Union and a longtime communicant of St. John the Baptist Church, where he served as an usher. Tom volunteered at the Salvation Army Food Kitchen; he was an avid shuffleboard player belonging to two leagues. Tom was predeceased by his beloved wife of 53 years, Anna Mae Morelli Woods; siblings, Charles H. Woods, Jr. and Mona Pugliesi Survivors include his loving children, Michael and his wife Nancy Woods of Schenectady, Brian and his wife Donna Woods of Rotterdam, Dennis and his wife Ann Woods of Glenville, Thomas Woods, Jr. of Schenectady and Timothy Woods and his companion Terri Costello, of Glenville; cherished grandchildren, Jaclyn Woods, Stephen Hulett, Matthew Woods, Adam Woods, Jordan Woods, Thomas E. Woods, III and Mikaela R. Woods; siblings, James Woods, of Caroga Lake, Patricia Krosky and her husband Richard, of Rotterdam ,Robert Woods, of Lake George; brother-in-law, Louis Pugliesi, of Denver, CO, also survived by several cousins, nieces and nephews. Services will be held Saturday morning at 8 AM from the Rossi & Ditoro Funeral Home, Union at N. Jay Streets, and then to St. Anthony Church, Seward Place, where a Mass will be celebrated at 9 AM. Interment will follow in St. John the Baptist Cemetery, Schenectady. The Woods family would like to extend a heartfelt thank you to the Glendale Home Staff of C-1 and A-1 and Karen and staff at Hospice, for the special care and attention given to Tom over the past 4 ½ years. Calling hours to which relatives and friends are invited to attend will be held Friday evening at the Rossi & Ditoro Funeral Home from 4 to 7 PM. Memorial contributions may be made in Tom’s memory to the Parkinson’s Disease Center of Albany Medical Center, 43 New Scotland Ave., Albany, NY 12208, Community Hospice of Schenectady, 1411 Union Street, Schenectady, NY 12308 or the Juvenile Diabetes Foundation, 6 Greenwood Drive, East Greenbush, NY 12061. For more information and directions, please visit www.rossiditorofuneralhome.com.

GLENVILLE &#8211; Thomas E. Woods, 81, formerly of Bellaire Drive, entered into eternal peace on Thursday at the Glendale Home. Tom was born in Schenectady on January 28, 1929, the son of the late Charles and A. Irene O&#8217;Connor Woods.... View Obituary & Service Information

The family of Thomas Woods, Sr. created this Life Tributes page to make it easy to share your memories.

Send flowers to the Woods, family.