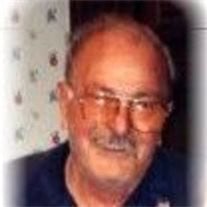 SCHENECTADY – Theodore W. Paniccia, Sr., 92, of VanVranken Avenue, passed away on Friday at home after a brief illness, surrounded by his loving family. Theodore was born in Schenectady on January 1, 1919, a son of the late Enrico and Carmella Ponzillo Paniccia. He was a 1938 graduate of Nott Terrace High School. He honorably served his Country in the United States Army during WWII. Ted was a member of the Local #128 Steam Fitters Union and he worked at the General Electric Company, retiring after 42 years of dedicated service. He continued working for 17 years at the YMCA at Mt. Pleasant Commons. Ted was devoted to his family, friends and his community, his true passion was his children and grandchildren, and being actively involved in their lives. He loved the game of baseball, especially local youth baseball where he served as past president of Northside Little League, Schenectady Babe Ruth and Commissioner of District 7 Babe Ruth. He was an avid NY Yankee fan and a communicant of St. Anthony’s Church. Ted was predeceased by his beloved wife, Betty Belile Paniccia, whom he married July 28, 1950 until her death August 23, 1995; siblings, Hugo Panica, Albert Paniccia, Emma Pardi, and twins Alice and Edward Paniccia. He is survived by his devoted children, Edward and Robin Paniccia of Schoharie, Theodore Paniccia and his wife Anna, of Ballston Spa, John Paniccia and his wife Peggy, Toni Jean Paniccia, Lisa Paniccia and Alice Porto, all of Schenectady; grandchildren, Kristen, Theodore III, Taylor Ann, John Jr., and Jessica Paniccia, Thomas III, Jason Sr., and Lisa Hall, Daniel Smith, Jr., Kyle O’Brey, Zachary, Marissa and Emily Porto and Jessica Ross; great-grandchildren, Noah and Max Cherubin, Jason Hall, Jr., and Olivia and Charlotte Ross; many nieces and nephews. Services will be held on Tuesday morning at 9 am from the Rossi & Ditoro Funeral Home, Union at N. Jay Street, then to St. Anthony’s Church, Seward Place, where a Mass will be celebrated at 10AM. Relatives and friends are invited and may call at the Rossi & Ditoro Funeral Home, Monday evening from 6 to 8 pm. For more information and directions please visit

SCHENECTADY &#8211; Theodore W. Paniccia, Sr., 92, of VanVranken Avenue, passed away on Friday at home after a brief illness, surrounded by his loving family. Theodore was born in Schenectady on January 1, 1919, a son of the late Enrico and... View Obituary & Service Information

The family of Theodore " Ted " Paniccia, Sr. created this Life Tributes page to make it easy to share your memories.