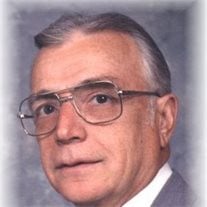 BRUNSWICK- Theodore M. “Ted” DeBonis, 84, entered into eternal peace on Saturday morning surrounded by his loving family. Ted was born July 8, 1926 in Troy, a son of the late Michael and Carmela Zotta DeBonis. Ted apprenticed with his father as a young boy at the family owned and operated shoe repair shop and was a graduate of School 14 and Troy High School. He honorably served his country in World War II as a technical Sergeant in the infantry, General Patton’s 3rd Army, 11th Armored Division. He received the European Theatre Operations Ribbon, Combat Infantry Badge, Good Conduct Medal, WWII Victory Medal, Luxembourg Medal of Honor and the Bronze Star Medal. Ted recently attended his 65 year reunion with his army comrades in Germany and Kentucky. Ted owned and operated The Troy Quick Shoe Repair Inc. for over 55 years. He was a very loyal and philanthropic part of his community. He was the past Exalted Ruler and a life member of the Troy Lodge of Elks #141, Director of the Board of the Society of St. Patrick. He had bestowed upon him life membership with the Italian Community Center of Troy, the Emerald Athletic Club, the Lansingburg Veterans, the D.A.V., and the Veterans of Foreign War. Ted was also a member of the American Legion, Noble Callahan Post #237 and the Troy Boy’s & Girl’s Club “Old Timers”. He was a recipient of the Hebrew Shofar Freedom Award, the Elks Distinguished Citizenship Award and was inducted into the Edward C. Picken T.H.S. Athletic Hall of Fame. He was formerly on the Board of Directors of the Boy’s and Girl’s Club and Samaritan Hospital. Ted was an avid fan of the N.Y. Yankees and the N.Y. Giants. He enjoyed traveling, gardening and photography. Ted was a man of honor and integrity, devoted to his family and friends. Among his many accolades, he was most proud of his loving family and their achievements. The DeBonis family would like to thank Fr. Randall P. Patterson, St. Peter’s Hospital, the Eddy Heritage House and Community Hospice of Rensselaer, for their kind and loving care and prayers over the past months. Ted was predeceased by his devoted siblings Dr. Anthony DeBonis and Angela DeBonis Wagstaff. He is survived by his cherished and beloved wife of 62 years, Florence Salerno DeBonis; many nieces, nephews, loving relatives and dear friends. A mass of Christian Burial will be celebrated Tuesday morning at 9:30 am at The Church of Our Lady of Victory, 55 N. Lake Avenue, Troy. Internment will follow in St. Mary’s Cemetery, Troy. Relatives and friends are invited and may call at The Church of Our Lady of Victory, Monday from 2 to 6 pm. In Lieu of flowers, memorial contributions may be made in Ted’s memory to The Church of Our Lady of Victory, The American Cancer Society, 260 Osborne Road, Loudonville NY 12211, or Community Hospice of Rensselaer, 295 Valley View Blvd, Rensselaer NY 12144. Funeral arrangements have been entrusted to the Rossi & Ditoro Funeral Home and the Philip J. Brendese Funeral Home.

The family of Theodore 'Ted' DeBonis created this Life Tributes page to make it easy to share your memories.

Send flowers to the DeBonis family.