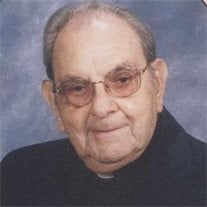 SCHENECTADY – The Reverend Father Anthony R. DeFranco, 99, the beloved Pastor Emeritus of St. Anthony's Church, entered into Eternal Life on Sunday, June 24th at his residence at the Teresian House in Albany. He was but 2 months short of 100 years old. He was born in Mormanno, Cosenza, Province of Calabria, Italy on August 28, 1912, the son of the late Joseph and Josephine Fortunato DeFranco. On March 19, 1914, St. Joseph's Day, he and his family immigrated to the United States, and they settled in Albany. He was a 1930 graduate of Cathedral High School, and he earned a Bachelor of Arts Degree from Holy Cross College in Worcester MA. At the time of his passing, he was the college's oldest surviving alumnus in the entire United States. The glorious journey of the Holy Priesthood began for him as he entered St. Joseph's Seminary in Yonkers, NY. Upon graduating from the seminary he was ordained in the Cathedral of the Immaculate Conception in Albany, on June 11, 1938, by the late Bishop Edmund F. Gibbons. He then became Assistant Pastor of Our Lady of Mt. Carmel Church in Schenectady. In 1939 he was appointed in the same capacity to Monsignor Michael Bianco at St. Anthony's Church in Schenectady until July of 1955 and at St. Joseph's Church in Albany until September of that year. In October he was appointed Administrator of the then Our Lady of the Assumption (now Our Lady Queen of Peace) Church in Rotterdam where he served until February 1961. Subsequently he was appointed Pastor of St. Rita's Church in Cohoes where he served until October 1969. He was then appointed by Bishop Edwin Broderick as Pastor of St. Anthony's Church in Schenectady until he retired as Pastor Emeritus on October 5, 1981. He was succeeded as Pastor by Fr. Dominic Ingemie, as Administrator by Fr. Edward Kacerguis, and later as Pastor by Fr. Richard Carlino and Fr. John Medwid. He forever remained a supportive mentor, sage counselor, and cherished friend to these Priests. Fr. DeFranco was lovingly referred to amongst his colleagues as "A Priest's Priest." He was a member of the Knights of Columbus in Schenectady and the Wallace Assembly 4th degree for over 60 years. He was past Chaplain of the Gabriele D'Annunzio Lodge, Order of the Sons of Italy of America #321 for a number of years and past Chaplain of the Boy and Girl Scouts. He was predeceased by his siblings, Domenica Rotondaro, Vincent "Jimmy" DeFranco, and Antoinette Paolucci, and Mary Filomena. He is survived by many loving nieces and nephews. Services will be conducted Thursday at 11:00 AM at St. Anthony's Church, Seward Place, where a Solemn Mass of Christian Burial will be Concelebrated with the Most Reverend Howard J. Hubbard, D.D., L.L.D., Bishop of the Albany Roman Catholic Diocese, as Principal Celebrant. Interment will follow in Calvary Cemetery, Glenmont. The reception of the body will be held at 4 PM on Wednesday at St. Anthony's Church. Relatives, friends and the parish community of St. Anthony's are invited to call at the church from 4 to 7:45 PM followed by a Prayer (Wake) Service from 7:45-8:30 PM. Memorial contributions may be made in Fr. Anthony DeFranco's memory to the St. Anthony's Church Memorial Fund, 331 Seward Place, Schenectady, NY 12305.

SCHENECTADY &#8211; The Reverend Father Anthony R. DeFranco, 99, the beloved Pastor Emeritus of St. Anthony's Church, entered into Eternal Life on Sunday, June 24th at his residence at the Teresian House in Albany. He was but 2 months short... View Obituary & Service Information

The family of The Reverend Father Anthony R. DeFranco created this Life Tributes page to make it easy to share your memories.