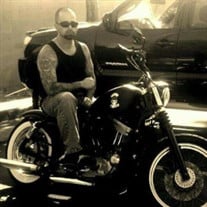 San Diego, CA - Scott Anthony Battaglia entered into eternal sleep on September 4, 2020. Scott was born on March 25, 1977 in Schenectady, New York. He was the son of Marie Redman and Anthony Battaglia and predeceased by his step mother Ellen Battaglia. Scott had 6 siblings: Jolene Riordan, Katrina Newhart, Daniel Battaglia and Nicole Williams; and he was predeceased by his brothers Jason Battaglia and Michael Battaglia. He was also predeceased by his loving grandmother, Antoinetta Galvano. Scott had many role models that were very close to his heart, loved dearly and he often expressed so much respect for: Aunt Glenda George, Aunt Pina Wood , a mother figure Arlene Torres, and the late Uncle Frank "Butch" Battaglia. He was an incredible uncle to several nieces and nephews. Scott moved to California as a young child, where he went on to become an amazing father to Elena, Angel, Catarina, Scotty Jr, and Lucianna. He was also a Grandfather to Kia. Scott loved talking about his children; they meant so much to him and he was constantly proud of their various accomplishments. He loved them all very much and will forever be remembered for being a loving and caring father. Scott did not limit his love and care to his children; many of those around him considered him their own brother, father figure, uncle or cousin. He embraced those around him often and considered them his extended family. One of Scott's favorite things to do was make those around him smile. He would do whatever he could by telling jokes or lend a helping hand to just put a smile on someone’s face. It was one of his best qualities. We will continue to think about how he was a loving son, a caring father, an amazing brother, a hilarious friend, incredible Uncle and all of the wonderful qualities that we all loved about him so much. May his soul Rest in Peace. Relatives and friends are invited to call at the Rossi & Ditoro Funeral Home on Friday, October 9th from 4 to 6 pm. In lieu of flowers, please send donations for the children to the following link to https://gf.me/u/y2tknp.

San Diego, CA - Scott Anthony Battaglia entered into eternal sleep on September 4, 2020. Scott was born on March 25, 1977 in Schenectady, New York. He was the son of Marie Redman and Anthony Battaglia and predeceased by his step mother Ellen... View Obituary & Service Information

The family of Scott Anthony Battaglia created this Life Tributes page to make it easy to share your memories.

Send flowers to the Battaglia family.