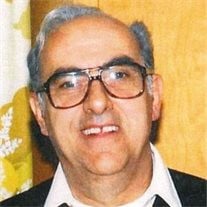 TOWN OF MILTON- Salvatore Croce, Jr., 83 formerly of Schenectady passed away on August 18th at home surrounded by his loving family. Sam was born in St. Johnsville, on September 28, 1931, a son of the late Salvatore and Madeline (Peretta) Croce, Sr. He was raised in Schenectady and was a 1949 graduate of Nott Terrace High School. Sam honorably served in the US Army during the Korean War. He worked as a mason for Lazio Construction Company in Rexford for 32 years, and later with Ellis Hospital for 12 years, where he delighted in creating and building their annual float for the Schenectady Christmas Parade. He was a communicant of St. Anthony's Church, enjoyed building projects and bowling with his friends. Sam was a man of great integrity, kind and honorable to his family, faith, community and friends. He leaves this legacy to the ones he loved so dear. Sam was predeceased by his beloved wife and his high school sweetheart, Barbara Contillo Croce, whom he married on November 20, 1955, until her death on February 29. 1988. Survivors include long time partner Marlene Risseeuw; devoted children, Michael P. Croce Sr. and Lisa Majewski; Hans and Sara Erickson; loving grandchildren, Michael P. Croce Jr., Nicholas Croce, David Majewski and Melissa Majewski, Christopher Erickson and Samantha Erickson; great-granddaughter Maniah Hill; brothers and sister, Louis Croce, Angie Barton, Steve Croce; and many nieces and nephews. Services will be held on Saturday, August 22nd at 8 am from the Rossi & Ditoro Funeral Home, 501 Union Street (at N. Jay) and then to St. John the Evangelist Church, Union Street, where a Mass of Christian Burial will be celebrated at 9 am. Entombment will follow in St. Anthony's Cemetery, Glenville. Relatives and friends are invited and may call at the Rossi & Ditoro Funeral Home on Friday, August 21st from 4:00pm-7:00pm.

TOWN OF MILTON- Salvatore Croce, Jr., 83 formerly of Schenectady passed away on August 18th at home surrounded by his loving family. Sam was born in St. Johnsville, on September 28, 1931, a son of the late Salvatore and Madeline (Peretta)... View Obituary & Service Information

The family of Salvatore Croce , Jr. created this Life Tributes page to make it easy to share your memories.

Send flowers to the , family.