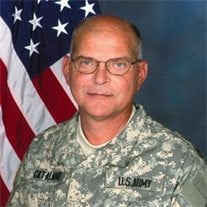 Russell A. Catalano (COL, Ret), of West Galway, NY, retired US Property and Fiscal Officer for NY Army National Guard passed away on February 18, 2017 after a brief illness. Born on February 19, 1948 in Schenectady, NY, he was a long time resident... View Obituary & Service Information

The family of Russell A. Catalano created this Life Tributes page to make it easy to share your memories.

Send flowers to the Catalano family.