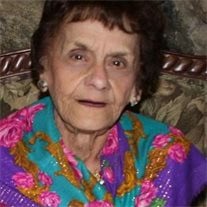 SCHENECTADY- Rosemary Vianna Lake, 92, entered peacefully into eternal rest on Wednesday at home surrounded by her loving family. Rosemary was born in Schenectady on September 21, 1922, a daughter of the late Antonio and Mary Ann Esposito Vianna. She graduated high school and joined the war effort by working at the General Electric Company during WWII. After the GE, she worked at Woolworth's at the candy counter and later at JM Fields and Leslie, Semple & Garrison Engraving Company. Her love and dedication to family was evident when she left working outside the home to care for her parents, husband and children. She was the definition of family, the matriarch; her role as daughter, wife, mother, grandmother and great grandmother was the most important thing to her. This is where she drew her strength and left her legacy. Rosemary enjoyed her summer camp on the Great Sacandaga Lake and was a member of the Overlook Beach Club. She was devoted to her faith and enjoyed EWTN. She most enjoyed creating cakes for her extended family, making each cake to commemorate every special occasion of their lives. She was predeceased by her beloved husband Edwin D. Lake, Sr. on May 16, 2008, after 63 years of marriage, and her siblings Felix Vianna, Mary Theresa Shea and Anthony Vianna. Rosemary is survived by her loving and devoted children, Edwin D. Lake, Jr., and his wife Lissa, of Saratoga Springs, Wayne Lake and his wife Dawn, of Corinth, Dennis Lake and his wife Kathleen, of Clifton Park and Mary Ann Frame and her husband Timothy, of Scotia; grandchildren, Dr. Amy Marie Bergin (Sean), Edwin D. Lake, III (Laura), Lorien Taylor Lake-Corral (Stephen), Jennifer Marie Frame, Wayne Vianna Lake, Jr. (Kara) , Casey Rose Early (Benjamin), Timothy James Frame, Jr. (Renee), Ashley Marie Horan (William) and Kevin Michael Frame; great grand-children, Noah Lake, Elijah Lake, Laken Bergin, Jacob Michael Lake, Katherine Early, Ashlyn Bergin, Charlotte Grace Horan, Linus Early and Kayleigh Rose Lake. Many wonderful nieces and nephews also survive. Services will be held on Monday from the Rossi & Ditoro Funeral Home, 501 Union Street (at N. Jay) on Monday at 8:30 am, followed by a Mass of Christian Burial at St. Joseph's Church, State Street at 9:30 am. Interment will follow in St. John the Baptist Cemetery. Relatives and friends are invited to call at the Rossi & Ditoro Funeral Home on Sunday from 2 to 4 pm. Memorial contributions may be made in Rosemary's memory to Community Hospice, 1411 Union Street, Schenectady, NY 12308 or to EWTN, 5817 Old Leeds Road, Irondale, AL, 35210.

SCHENECTADY- Rosemary Vianna Lake, 92, entered peacefully into eternal rest on Wednesday at home surrounded by her loving family. Rosemary was born in Schenectady on September 21, 1922, a daughter of the late Antonio and Mary Ann Esposito... View Obituary & Service Information

The family of Rosemary Vianna Lake created this Life Tributes page to make it easy to share your memories.

Send flowers to the Lake family.