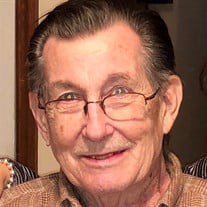 NISKAYUNA – Roland J.F. Witmer, 78, entered peacefully into the arms of the Lord on Saturday, August 10, 2019 at Ellis Hospital, surrounded by his loving family. Roland was born September 22, 1940 in Schenectady, a son of the late Roland J and Catherine Weast Witmer. He graduated from South Colonie High School in 1958, where he set the longstanding record for the 440 yard dash. With his quest for learning and advancement, Roland continued his education at Boston University, a member of Sigma Alpha Epsilon, and Northeastern University where he received his Masters Degree in Guidance Education. He worked as a Guidance Counselor for 30 years at Mohonasen High School, retiring in 1996. He embraced his career, encouraging his students to pursue their dreams and goals, especially those who were considering to serve our Nation in the Armed Forces. Roland was a member of the Rotterdam Elks. Roland’s daughter is thankful to the NP, PA’s, RN’s and the PCT’s at Ellis Hospital, C6 Neurology Wing, for their impeccable care, compassion and empathy. They cared for Roland as if he was a member of their own family. He is survived by his cherished and loving daughter, Dottie Mazzarella; a brother, James (Mary Ann) Witmer; his friend and former wife, Dorothy Witmer; nieces and nephews, Donna (Ed) Czeremcha, Jamie and John Witmer; his loving four legged fur baby Sydney; many friends, former students and colleagues. Services will be held on Wednesday at 9 am from the Rossi & Ditoro Funeral Home, 501 Union Street and then to St. Kateri Tekakwitha, Union Street, where a Mass will be celebrated at 10am. Interment will follow in Most Holy Redeemer Cemetery. Relatives and friends are invited to call at the Rossi & Ditoro Funeral Home on Tuesday from 5 to 7 pm. Those wishing may make a memorial contribution in Roland’s memory to Schenectady Protective Foundation at www.animalprotective.org

NISKAYUNA &#8211; Roland J.F. Witmer, 78, entered peacefully into the arms of the Lord on Saturday, August 10, 2019 at Ellis Hospital, surrounded by his loving family. Roland was born September 22, 1940 in Schenectady, a son of the late Roland... View Obituary & Service Information

The family of Roland J.F. Witmer created this Life Tributes page to make it easy to share your memories.

Send flowers to the Witmer family.