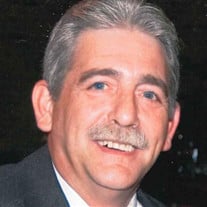 SCHENECTADY – Robert ‘Robby’ Siatkowski, 65, entered peacefully into eternal rest at Ellis Hospital on Thursday, February 6, 2020 surrounded by his loving family. Robby was born in Niskayuna on October 8, 1954 the son of the late Robert and Mary ‘Nina’ Badalucco Siatkowski. He grew up in Glenville and graduated from Scotia-Glenville High School, class of 1973. Robby was the owner and operator of Turner Floor Services for over 40 years, until the onset of his illness. He was a devoted family man who loved spending time with his grandchildren. He treasured the family camp at Sacandaga Lake and the countless nights gathering with family and friends around the fire, enjoying spirits, food and stories that were repeated yearly and funnier each time. Robby was an avid scratch bowler and at one time could boast he was the youngest player to throw a perfect game. He was a member of Scotia Majors, now Sportsman’s Majors, Capital District All-Star & Vitalo Classic League and several other classic leagues. In addition to his parents, Robby was predeceased by his brother Mark Siatkowski and his step-mom Judy Siatkowski. He is survived by his beloved and devoted wife of 25 years, Theresa ‘Terri’ Serge Siatkowski; loving daughter, Jessica (Paul) Swint; step-daughters, Lisa (Brian) Lounsbury and Tricia Holley; grandsons, Paul, Robert, Jonathan, Billy and Seamus; loyal brothers, Tom (Cindi) Siatkowski and Peter (Linda) Siatkowski; several aunts, uncles, nieces, nephews, cousins and friends also survive. Services will be held on Wednesday at 7 pm at the Rossi & Ditoro Funeral Home, 501 Union St. Relatives and friends are invited and may call at the Rossi & Ditoro Funeral Home on Wednesday from 4 to 7 pm. In lieu of flowers, contributions to the family will be accepted by the funeral home on their behalf.

The family of Robert 'Robby' Siatkowski created this Life Tributes page to make it easy to share your memories.

Send flowers to the Siatkowski family.