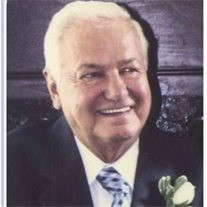 GLENVILLE – Robert F. "Bob" Siatkowski, 82, died unexpectedly on Monday at Ellis Hospital. Bob was born in Rotterdam, a son of the late Frank and Eva Miller Siatkowski. He was a 1949 graduate of Draper High School. He worked for the New York Central Railroad, AC Body Works in Rotterdam and for over 20 years at Van Curler Motors, before becoming a partner at Martin Auto on Vley Road in Scotia. Bob, Dad Sy to many, was an optimist; he loved life, his friends and especially his family. He was an ardent bowler for over 40 years, recently receiving a lifetime achievement award from the Scotia Majors. He enjoyed trout fishing, gambling and the outdoors. Bob's most cherished memories were the times he spent at his camp on the Great Sacandaga Lake and the togetherness that it brought to his family. He served in the Air National Guard and was a communicant of St. Joseph's Church in Scotia. Bob was predeceased by his parents, his wife Nina Siatkowski in 1991, his sons Joseph Siatkowski and Mark Siatkowski and his siblings, George Miller, Nora Pudvah, Dorothy Viscusi and Tina LaMalfa. He is survived by his beloved wife of 18 years, Judy Adach Siatkowski; devoted sons, Robert and Terri Siatkowski, of Schenectady, Tommy and Cindi Siatkowski, of Glenville and Peter and Linda Siatkowski, of Castleton; step-children Jerry and Kathy Adach of Rotterdam and Tom and Betsy Adach of Glenville; grandchildren, Jessica, Jonathon, Kristen, Nicholas, Zachary and Amanda; step-grandchildren, Kristen, Nicole, Justin and Josh; great-grandchildren Paulie, Anthony, Autumn, Robert and Addison; his siblings, Charlie Miller, Mary and Dom DiNola and Bill and Pat Siatkowski; brother-in-law of Patty and Jimmy Barbarulo. Neal and Irene Brazell and Charles Viscusi all of Rotterdam; many nieces and nephews also survive. Services will be held on Friday morning at 8:30AM from the Rossi & Ditoro Funeral Home, Union at N. Jay Streets and then to St. Joseph's Church, 2nd Street, Scotia, where a mass will be celebrated at 9:30 AM. Interment will follow in Park Cemetery, Scotia. Relatives and friends are invited and may call at the Rossi & Ditoro Funeral Home Thursday evening from 4 to 7 PM. Memorial contributions may be made in Bob's memory to Community Hospice of Schenectady, 1411 Union Street, Schenectady, NY 12308.

GLENVILLE &#8211; Robert F. "Bob" Siatkowski, 82, died unexpectedly on Monday at Ellis Hospital. Bob was born in Rotterdam, a son of the late Frank and Eva Miller Siatkowski. He was a 1949 graduate of Draper High School. He worked for the... View Obituary & Service Information

The family of Robert Bob Siatkowski created this Life Tributes page to make it easy to share your memories.

Send flowers to the Siatkowski family.