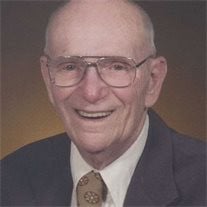 ROTTERDAM – Robert D. Otto, 91, entered peacefully into the arms of the Lord on Friday, January 3, 2014, at his home after a brief illness. Bob was born in Oneonta on August 6, 1922 a son of the late Clarence and Mae Burrel Otto. He enlisted in the United States Marine Corps, and served in the Southwest Pacific Theater during WWII, participating in four major battles. He worked at Millivac Instruments in Rotterdam for many years. He was a member of the American Legion Post, and former daily communicant of Immaculate Conception Church. Bob was devoted to his family and will be remembered for always having a smile on his face. His family brought him great joy, from playing school, getting his haircut, gardening and giving high fives. His granddaughters and great-grandson brought a lot of fun to his life. He loved walking and singing. Bob's family would like to thank the staff of Community Hospice for their kindness, compassion and support. He was predeceased by his beloved wife whom he married April 28, 1957, Mary Sorgiovanni Otto who died February 7, 1971 and his loving siblings and their spouses, Doris and Ken Chase, John Kohler and Nick Sorgiovanni; nephews Ken and Dick Chase. He is survived by his devoted daughters, Frances and her husband Glen Allen of Rotterdam Jct. and Mae and her husband Jay Walsh of Rotterdam; his adoring granddaughters, Jamie and her husband Kacy Daus, Jessica and her husband Jesse Hopper and Mary Walsh; a great grandson, whom he adored, Robbie Daus; brother-in -law of Frank Sorgiovanni, Jenna Kohler, Dolores and Walter Pikor; several nieces and nephews also survive. Services will be held on Wednesday morning at 9 am from the Rossi & Ditoro Funeral Home, Union at N. Jay Street, then to St. Anthony's Church, Seward Place, where a Mass will be celebrated at 10am. Interment will follow with military honors in St. Joseph's Cemetery, Schenectady. Relatives and friends are invited and may call at the Rossi & Ditoro Funeral Home, Tuesday from 4 to 7 pm. Memorial contributions maybe made to Community Hospice, 1411 Union St., Schenectady, NY 12308.

ROTTERDAM &#8211; Robert D. Otto, 91, entered peacefully into the arms of the Lord on Friday, January 3, 2014, at his home after a brief illness. Bob was born in Oneonta on August 6, 1922 a son of the late Clarence and Mae Burrel Otto. He... View Obituary & Service Information

The family of Robert D. Otto created this Life Tributes page to make it easy to share your memories.

Send flowers to the Otto family.