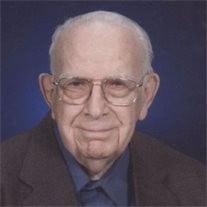 ROTTERDAM - Robert P. Navarette, born October 27, 1926, in Schenectady, died on the morning of December 30, 2010, at the age of 84. He was the son of the late Peter and Pauline Sutton Navarette. Mr. Navarette resided at the Baptist Nursing Home, since August. He was a graduate of Nott Terrace High School and Albany Business College. Mr. Navarette was a four year veteran of the U.S. Air Force having served from 1951-1955. He received an honorable discharge after having attained the rank of Airman First Class. Mr. Navarette worked as a manager-auditor for the Jewel Tea Co. for 10 years, and then as an appraiser in the assessor’s Office of the City of Schenectady for 22 years, retiring in 1992. Mr. Navarette was a member of Our Redeemer Lutheran Church, of Scotia, NY, and a 43 year member of the Beukendaal Lodge No. 915, F. & A.M. He enjoyed camping in Maine and the Adirondacks and many trips to England to visit his daughter and family. Mr. Navarette received excellent care of his Alzheimer’s disease at the Baptist Nursing Home. Mr. Navarette was the father of the late Karen Navarette Stone and was predeceased by his uncle James Navarette and several aunts, uncles and cousins. He is survived by his wife, Margaret ‘Peg’, four grandchildren, Matthew Stone, US Navy stationed in Hawaii, Jonathan Stone, Elizabeth Stone, and Christopher Stone, all of Skipton, England, brothers-in-law and sisters-in-law, Viggo Christensen, Shirley Christensen, Doris and Sid Brown, John and Jo Mageean; cousin, Rhea and Jack Klapprodt; many cousins, nieces and nephews. Services will be held Monday morning at 11:30 AM at the Rossi & Ditoro Funeral Home, Union at N. Jay Streets with Rev. Dr. Dennis Meyer, officiating. Interment will follow in St. John the Baptist Cemetery. Relatives and friends are invited and may call at the Rossi & Ditoro Funeral Home, Sunday 3 to 5 PM. Contributions in Mr. Navarette’s memory may be made to the memorial fund of Our Redeemer Lutheran Church, 103 South Reynolds St., Scotia, NY 12302 or to a charity of one’s choice. For more information and directions, please visit www.rossiditorofuneralhome.com.

ROTTERDAM - Robert P. Navarette, born October 27, 1926, in Schenectady, died on the morning of December 30, 2010, at the age of 84. He was the son of the late Peter and Pauline Sutton Navarette. Mr. Navarette resided at the Baptist Nursing Home,... View Obituary & Service Information

The family of Robert P. Navarette created this Life Tributes page to make it easy to share your memories.

Send flowers to the Navarette family.