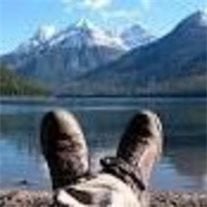 TOWN OF MILTON – Robert M. Myers, 52, died peacefully at his home on Saturday, April 26, 2014. Robert was born on November 9, 1961 a son of Robert Burton Myers and the late Anna Jennie Camino Myers. He was a 1979 graduate of Whitesboro High School and received his BS degree in Marketing and Sales from Utica College. Bob worked as a general manager for Ponderosa for 15 years in Rome and Herkimer. He relocated to the Saratoga area, after accepting a position with ECOLAB, where he worked, as recently as Friday night as a territory manager for the past 20 years. Bob was a strong, vibrant and devoted man. He had a steadfast work ethic, enabling him to excel in all of his endeavors. He loved spending time with his wife in the outdoors and camping. Bob was a communicant of St. Mary's Church in Ballston Spa. In addition to his father Robert, survivors include his beloved wife, Maryann Newman Myers, whom he married on August 5, 1989; siblings, Dr. Pamela Myers and her husband John McGeagh, of Glade Spring, VA and Kenny Myers and his wife Cheryl, of North Ridgeville, OH; an aunt, Carol Consalvo, of Schenectady; cousins, Paul and Leslie Consalvo and Terry Dewey; sisters and brothers –in- law, Dawn and Carl, Arthur and Renee and Michael and Sherry; many nieces, nephews, cousins and dear friends also survive. Services will be held on Wednesday at 8:30 am from the Rossi & Ditoro Funeral Home, Union at N. Jay Streets and then to St. Mary's Church, Route 50, Ballston Spa, where a Mass will be celebrated at 9:30 am. Interment will follow in St. Anthony's Cemetery, Glenville. Relatives and friends are invited and may call at the Rossi & Ditoro Funeral Home on Monday and Tuesday evenings from 4 to 7 pm. Memorial contributions may be made in Bob's memory to the National Kidney Foundation, Finance Department, 30 East 33rd St., New York NY 10016.

The family of Robert M. Myers created this Life Tributes page to make it easy to share your memories.