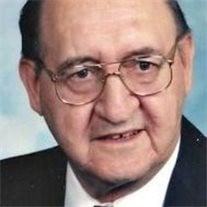 SCHENECTADY - Robert D. Barron, our beloved father, grandfather and great-grandfather, died Jan. 15 in Schenectady, NY, at age 92. Robert (Bob) was born in Friedens, Somerset County, PA, December 4, 1925. After high school he joined the Navy and served as an Aerographer's Mate in the Pacific Theater during WWII. He subsequently graduated from Penn State University with a degree in Metallurgy. He married I. Margaret M. Light in 1950. After working in several other foundry operations in Pennsylvania, Illinois, and Geneva, NY, Bob worked for twenty-five years as the Plant Engineer for Kennedy Valve Manufacturing in Elmira, NY, retiring in 1987. He and Margaret were members of Lake Street Presbyterian Church in Elmira since 1963. Margaret passed away in 2003. In 2009, Bob moved to the Schenectady, NY area. Bob had a passion for researching and documenting Barron family history in Somerset County, PA. He was a devoted student of history. Bob especially enjoyed books about the Civil War and WWII. He enjoyed sports, especially Penn State football. He was also an avid stamp collector, focusing on First Day covers and their associated cachets. He wrote many articles that were published in the stamp journal First Days. He was an avid gardener and enjoyed supplying vegetables to family and neighbors. He enjoyed watching Jeopardy and testing his knowledge along with the contestants. A desire to learn new things every day and expand his already extensive knowledge continued into retirement through reading non-fiction books on a multitude of subjects. He had a wonderful sense of humor and positive outlook on life. He was devoted to his family. Bob is preceded in death by his wife and his ten older siblings. He is survived by his children Karen Donegan (Peter Williams) of E. Setauket, NY, Kevin Barron (Lynda) of Blossburg, PA, Keith Barron (Susan) of Chesterfield, VA and Kathryn Rose (Richard) of Schenectady, NY, seven grandchildren, five great-grandchildren and many nieces and nephews. Interment will be at Woodlawn Cemetery, Elmira, NY, on January 20th, 11am. In lieu of flowers, donations may be made to the Somerset County Historical Society or the American Diabetes Research Foundation.

The family of Robert D. Barron created this Life Tributes page to make it easy to share your memories.