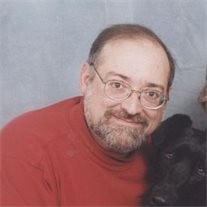 GLENVILLE– Dr. Robert A. Consalvo, 59, entered into eternal rest Tuesday evening at Ellis Hospital, after a brief illness. Robert was born in Schenectady, a son of Robert and Carol Camino Consalvo. He was a graduate of Bishop Gibbons High School, Class of 1969. He attended Mohawk Valley Community College, where he received an Associates Degree in Applied Sciences, a Bachelor’s and Master’s Degree from the University at Albany in Business Education and Accounting. He received his Ph.D. in Business Administration from Columbia Southern University, Orange Beach, AL. Robert was dedicated to his profession, teaching Business for Maria College, Empire College and Southern Vermont College in Bennington, VT, where he taught for 24 years. At Southern Vermont College, Robert wrote and developed the Sports Management Program where he took his love of sports and incorporated how to run a sports team, creating internships for his beloved students for the Albany River Rats and St. Anthony’s Golf Course in Bennington. He was a chairman for many departments including McCormick Division of Business and Chair of the Accounting Department. He was a proud recipient of the Southern Vermont College Instructor of the Year, which he was awarded twice. Robert was an avid golfer and he loved his Giants and Yankees. He was a communicant of St. Anthony’s Church in Schenectady where he was a very dedicated Festa worker, where he could be seen nightly, listening to his beloved Yankees on the radio. Robert was predeceased by his father, Robert Consalvo. Survivors include his beloved and devoted wife Terry Dewey; loving mother, Carol Consalvo; brother, Paul Consalvo and his wife Lesley of Rochester; nephew, Robert Consalvo; uncle, Robert Myers and his devoted canine companions, Princess and Stormy. Services will be held Saturday morning at 9 AM from the Rossi & Ditoro Funeral Home, Union at N. Jay Streets, then to St. Anthony’s Church, Seward Place, where a Mass will be celebrated at 10 AM. Interment to follow in St. John the Baptist Cemetery, Brandywine Avenue. Relatives and friends are invited to call at the Rossi & Ditoro Funeral Home, Union at N. Jay Streets, Friday evening from 4 to 7 PM. Roberts family kindly requests no flowers be sent. The family urges memorial contributions to be made in Robert’s memory to the Robert Consalvo Scholarship for Students, Southern Vermont College, 982 Mansion Drive, Bennington, VT 05201. For more information and directions, please visit www.rossiditorofuneralhome.com

GLENVILLE&#8211; Dr. Robert A. Consalvo, 59, entered into eternal rest Tuesday evening at Ellis Hospital, after a brief illness. Robert was born in Schenectady, a son of Robert and Carol Camino Consalvo. He was a graduate of Bishop Gibbons High... View Obituary & Service Information

The family of Dr. Robert A. Consalvo created this Life Tributes page to make it easy to share your memories.

Send flowers to the Consalvo family.