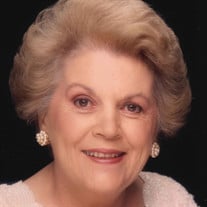 SCHENECTADY – Rita DiMeo, 93, went home to the Lord on Thursday, March 14, 2019. Rita, a daughter of Joseph and Adeline (Namias) Krone, was born in New York City on October 3, 1925. She was a 1943 graduate of Mt. Pleasant High School, and worked during the War Effort for the Navy Department at General Electric, and later at the VA Hospital. Rita devoted her life to her children, godchildren, nieces and nephews, embracing each part of their lives and accomplishments. She was rewarded in life with the addition of her eight grandchildren whom she loved so dearly. Rita was predeceased by her siblings: Raymond, James, and George Krone, Adeline Derkowski, Shirley Caisse, Alice Abigail, and Mary Sharron. She is survived by her beloved husband of 72 glorious years, Herman J. DiMeo; loving children, Susan (Charles Willand) DiMeo, James (Maureen) DiMeo, Diane DiMeo (David) Dickinson, John (Shari) DiMeo, and Robert DiMeo; grandchildren, Elise (Matthew) Sievert, Paul, Jill, Peter, and James DiMeo, and Katie, Kristie, and Jenna Dickinson; a brother-in-law, Bruce Sharron, and many loving nieces and nephews. We wish to thank the staff and volunteers at Baptist Health for their kindness and compassionate care for Rita, as well as for Herm and their family. Services will be held on Monday at 10 am from the Rossi & Ditoro Funeral Home, 501 Union Street, then to St. Anthony’s Church, Seward Place, where a Mass of Christian Burial will be celebrated at 11 am. Relatives and friends are invited and may call at the Rossi & Ditoro Funeral Home on Sunday from 2 to 5 pm. In lieu of flowers memorial contributions may be made in Rita’s memory to St. Anthony’s Bread, 836 Sanders Avenue, Scotia, NY 12302.

The family of Rita DiMeo created this Life Tributes page to make it easy to share your memories.

SCHENECTADY – Rita DiMeo, 93, went home to the Lord on Thursday,...

Send flowers to the DiMeo family.