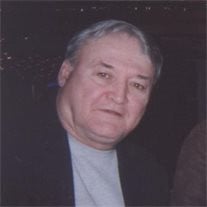 SCHENECTADY- Richard P. Kwak, 66, died Wednesday at Ellis Hospital, after a brief illness. Richard was born March 26, 1944 in Schenectady a son of Marian Schier Kwak and the late Walter H. Kwak. He was a graduate of Mt. Pleasant High School and honorably served his country in the Navy during the Vietnam War. Richard was an assembler in Power Generation Systems for the General Electric Company retiring in 2004 after 42 years of devoted service. He was an avid golfer and a member of the Bedrock Golf Club. He survives by his beloved wife Tracey Liuzzi Kwak whom he married June 15, 2001; two loving sons, Richard Kwak, of Schenectady and Kevin Kwak, of Amsterdam; devoted mother, Marian Schier Kwak, of Schenectady; a granddaughter Keira Kwak; siblings John and his wife Patricia Kwak, of Schenectady, James Kwak, of Schoharie, Cassandra and her husband Nick Kopchick, of Argyle, Susan and her husband Vincent Loffredo, of Lenexa, KS, David and his wife Robin Kwak, of Bridgemont, MI, Eugene and his wife Anita Kwak, of Scotia, Celeste Kwak, of Voorheesville, Alice Gilroy, of Schenectady, Tracy and her husband Russell Oppelt, of Fultonham; mother-in-law, Susan and her husband Jay Freud and a sister-in-law, Michelle Martin, all of Clifton Park; many nieces, nephews and dear friends. A service celebrating the life of Richard Kwak, will be held on Friday at 5 PM at the Rossi & Ditoro Funeral Home, Union At N. Jay Streets, Schenectady, with Fr. Dominic Isopo, officiating. Relatives and friends are invited and may call at the funeral home Friday from 1 to 5PM. The funeral procession will form at the Rossi & Ditoro Funeral Home, Monday at 12:30 PM and proceed to the Gerald BH Solomon Saratoga National Cemetery, Schuylerville, where the interment with full military honors will take place at 2 PM.

The family of Richard P. Kwak created this Life Tributes page to make it easy to share your memories.

Send flowers to the Kwak family.