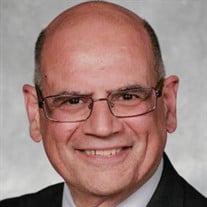 SCHENECTADY – Richard Harold Ferro, 73, entered into eternal peace on Friday, February 18, 2022, at Ellis Hospital, surrounded by his loving family. Richard was born in Schenectady on January 18, 1949, a son of the late Harold and Mary Ricci Ferro. He was a 1966 graduate of Linton High School; he graduated from Tufts University in 1970 with a BS degree in Electrical Engineering and earned his MBA from the University of Albany in 1978. As an Electrical Engineer, Richard worked with Westinghouse, Niagara Mohawk and General Electric; before finding his niche and true passion in Commercial Real Estate, at the urging of his close friend and neighbor, Jeff Christiana. Richard began his long and exceedingly successful career in 1990, for Prudential Blake-Atlantic REALTORS, where he became a Principal Broker and Manager, and recruited, trained, mentored, and coached real estate brokers and salespersons for decades. In 2015, he became a Principal Broker in the Commercial Division of Berkshire Hathaway HomeServices Blake REALTORS; and was a member of the Commercial Advisory Council. Richard achieved the “gold standard” for real estate professionals by earning his CCIM (Certified Commercial Investment Member) designation. He was admired and revered by all of his colleagues and dear friends; many of whom were not aware of his health condition, as he continued to work full-time during many stays in the hospital. Richard was a true fighter, with gratitude in his heart, and a hero to all who were blessed to know him. Richard was named “2021 Realtor of the Year” by the New York State Commercial Association of REALTORS, Inc. (NYSCAR) Board of Governors. His exceptional community service and volunteer work included serving as President (twice) and Board Member of Commercial & Industrial Real Estate Brokers, Inc. (CIREB); NAR Certified Mediator, NYS Certified Instructor, and RPAC Committee and Professional Standards Committee Member for Greater Capital Association of REALTORS (GCAR); Board Chairman and Member of Junior Achievement of Northeastern New York; Chairman and Board Member of Schenectady County Chamber of Commerce; President and Board Member of the Schenectady East Rotary Club; Chairman of the Schenectady County Industrial Development Authority; and member of the City of Schenectady Planning Commission. Richard was fiercely loyal to his hometown, and dedicated a significant portion of his talent, skills and expertise to its improvement. His faith in God, and his beloved St. Anthony’s Church, helped carry him through his toughest times. His extensive service to St. Anthony’s included President of the Finance Committee, Lector, Eucharistic Minister, and an integral part of its annual Festa and various fundraisers. Richard was a proud member of IDAKA – the Italian Americans of Schenectady, NY; Son of Italy, Lodge #321, and the Rotterdam Elks Lodge #2157. Above all else, Richard’s devoted family was most important to him. His pride in his wife, children, grandchildren, and siblings was second only to their pride in him. Richard’s kind heart, generous spirit, and engaging smile made everyone feel welcome, and he left us all better for knowing him. Richard was an accomplished chef, and his passion for cooking was the ultimate reward for his family and friends. He was the consummate “life mentor” in all respects – including how to live a truly beautiful, elegant and fulfilling life. His precious time with loved ones on Sacandaga Lake and Anna Maria Island will provide them comfort for years to come. There is no doubt that his love for his family, friends, and pets Enzo and Chloe, was most important to Richard. Richard was predeceased by his parents; brothers, Ronald and Mark Ferro; nephew, Justin DePaula; and brother-in-law, Joseph Rucker. Richard is survived by his beloved wife, Lois Caracciolo Ferro, whom he married on October 17, 1970;his loving children, Lisa and Baird Joslin, and Jason Ferro; adoring grandchildren, Carina and Jacob Joslin, and Logan and Ryan Ferro; devoted siblings, Anita (Van) Stathis, Serena Rucker, and Christina (Michael) DePaula; brother-in-law, Joseph (Carol) Caracciolo; Aunt Angie Caracciolo; nephews, John and Eric Stathis, Jared (Shelly) DePaula, Joseph (Amanda) Caracciolo, and Jillian (Brody) Savoie; and many cousins, dear friends and colleagues. A Mass of Christian Burial will be celebrated on Tuesday at 11 am at St. Anthony’s Church, 331 Seward Place. Entombment will follow in Most Holy Redeemer Cemetery, Niskayuna. Relatives and friends are invited to call at the Rossi & Ditoro Funeral Home, 501 Union Street, on Monday from 3 to 7 pm. Richard’s family would like to express their sincere gratitude to Dr. Robert Joy, Dr. Hani Shahata, Dr. George Giokas, Dr. Arthur Stevens, the nursing staff of the Ellis Hospital ICU and 6th Floor, and numerous other care providers for their tireless efforts on his behalf. Those who wish to honor Richard in a special way are asked to consider memorial contributions in his memory to St. Anthony’s Church Restoration Fund; Junior Achievement of NENY (neny.ja.org);or the Schenectady City Mission (citymission.com/donate/).

SCHENECTADY &#8211; Richard Harold Ferro, 73, entered into eternal peace on Friday, February 18, 2022, at Ellis Hospital, surrounded by his loving family. Richard was born in Schenectady on January 18, 1949, a son of the late Harold and Mary... View Obituary & Service Information

The family of Richard H. Ferro created this Life Tributes page to make it easy to share your memories.

Send flowers to the Ferro family.