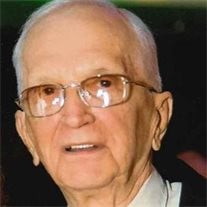 ROTTERDAM – Raymond J. Zyskowski, Sr., 90, went home to the Lord on Monday, April 9, 2018 at Ellis Hospital after a short illness. Ray was born in Rotterdam, a son of the late Peter and Katherine Grezegorzewski Zyskowski, Sr. He honorably served in the Army Air Force from 1946-1949. Upon discharge from the service, Ray attended Veterans Vocational School, which later became HVCC, specializing in Electronics. He was employed for many years at the General Electric Company, retiring in July 1, 1988. Ray was a member of the Polish American Veterans, VFW Post 1895, the Rotterdam Elks and Our Lady Queen of Peace Church. He enjoyed shooting darts, hunting deer with his sons and fishing. Ray was proud of the camp he built at Sacandaga Lake, where he spent many summers with his family and friends. Ray's greatest joy was his family, who will remember him for his foresight, courage, strong will, kindness and unique sense of humor. He could fix, repair, and build anything and unselfishly shared his talents with his family and friends. The Zyskowski family would like to thank the entire staff of Schenectady Center for Rehabilitation and Nursing for their wonderful kindness and compassion extended to us. He was predeceased by his parents; siblings, Marion Buchwald, Peter Zyskowski, Jr. and Edwin Zyskowski. Ray is survived by his beloved wife Olga Sabatelli Zyskowski whom he married July 1, 1950. Their children, Kenneth and Carol Zyskowski of Delanson; Kathy and James McClaskey of Cornelius, NC and Raymond J. Zyskowski, Jr. of Hadley; grandchildren Brian Zyskowski of Garner, NC; Michael Zyskowski of Rotterdam; Noah McClaskey; Nina McClaskey; Katherine & Robert Duell; Dorothy & Kevin Koryto; Raymond J. & Caitlin Zyskowski, III; great grandchildren, Sienna Zyskowski; Ethan Zyskowski; Brynn & Bryce Duell; Brandon & Alexander Koryto; Brother-in-law of Shirley Zyskowski and Richard Frigolette; also survived by several nieces, nephews & cousins. Services will be held Saturday morning at 8:30am from the Rossi & Ditoro Funeral Home, 501 Union Street, and then to Our Lady Queen of Peace Church, Princetown Road, where a Mass will be celebrated at 9:30am. Interment will follow in Schenectady Memorial Park. Relatives and friends are invited and may call at the Rossi & Ditoro Funeral Home Friday evening 3 to 7PM.

ROTTERDAM &#8211; Raymond J. Zyskowski, Sr., 90, went home to the Lord on Monday, April 9, 2018 at Ellis Hospital after a short illness. Ray was born in Rotterdam, a son of the late Peter and Katherine Grezegorzewski Zyskowski, Sr. He honorably... View Obituary & Service Information

The family of Raymond J. Zyskowski, Sr. created this Life Tributes page to make it easy to share your memories.

Send flowers to the Zyskowski, family.