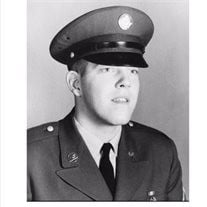 Glenville, NY – Ralph Joseph Putrock, 65 of Glenville died tragically in an automobile accident on Monday, October 26, 2015 in Glenville, NY. Born on April 25, 1950, he was the son of the late Ralph Joseph Putrock, Sr. and Margaret Diamond. He attended Mount Pleasant High School in Schenectady. He proudly served in the United States Army during the Viet Nam War and was the recipient of multiple Purple Heart Medals, Good Conduct Medal, National Defense Service Medal, Vietnam Service Medal, Vietnam Campaign Medal with Device and Combat Medical Badge. After his time in the Army he then joined the United States Navy. Ralph loved dogs, most recently Bear and Molly, and spent most of his life pursuing his passions of restoring hot rod and muscle cars and riding motorcycles. He is survived by his son Joe Putrock of Troy, NY and daughter Kelli Morningstar of Hinesville, GA as well as numerous grandchildren. He is also survived by Carmen Montanaro, whom he helped raise after the death of his best friend Michael Montanaro, and Jason Squires whom also grew up with Ralph. Relatives and friends are invited and may call on Wednesday, November 4, 2015, from 4-7 p.m. at the Rossi and Ditoro Funeral Home, 501 Union Street, Schenectady, NY. Burial will be Friday, November 6, 2015 at Gerald B. H. Solomon Saratoga National Cemetery. The funeral cortage will meet at the entrace of the cemetery at 12:15 pm. In lieu of flowers, memorial contributions can be made to The Saratoga National Cemetery Honor Guard Association, 200 Duell Road, Schuylerville, New York 12871.

The family of Ralph Joseph Putrock created this Life Tributes page to make it easy to share your memories.