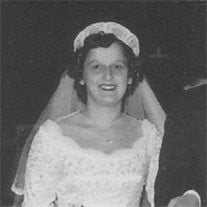 ROTTERDAM - Phyllis J. Phillips of Old Fort Avenue, died early Thursday morning at Ellis Hospital due to complications following surgery. Her 78th birthday was July 9th. She is predeceased by her loving husband of 54 years, Joseph “Al” Phillips and is survived by her son Michael of Saratoga Lake NY, her sisters Norma Iannotti and Eleanor La Malfa, several nieces, nephews, grand nieces, grand nephews and a community of friends and relatives on both U.S. coasts too numerous to list. Celebrating mass daily at Our Lady Queen of Peace, Phyllis was a very active and caring woman who strove to give back to others and to provide care for those who needed her. She looked after her older sisters and brother-in-law, visited with Church members and went to the local gym almost daily for exercise. She served as an Eucharistic Minister and in the Rosary Society at her parish and had just completed preparation for the annual Festa, a role that she took part in every year, and which gave her great satisfaction year in and year out. She put her trust in people and institutions, and met her own obligations consistently and in an unquestioning manner. She never had a bad word for anyone and no one could have asked for a more conscientious daughter, wife, Mother, sister, aunt, friend or co-worker. She served her family and community throughout her life with kindness, generosity, patience, understanding and good cheer. She loved being in the presence of family and friends and kept the Christmas holiday season with particular enthusiasm. She kept her home in a consistently immaculate condition and she never denied anyone who asked for her help and usually no one ever had to ask. The many individuals and organizations whose lives she touched are now feeling the absence of her daily presence. Born on July 9th, 1933, she was the youngest of 6 children, born to Peter and Grace Eats Delory. She attended the Draper school, graduating with distinction and then went on to work. She married Joseph A. “Al” Phillips in October 1953. Her son Michael was born in 1957 and the young family then left Schenectady for South Dakota and Los Angeles, returning to Rotterdam in 1969. Always working outside the home, she was a full financial partner in the marriage with her husband. Phyllis joined New York State Civil Service in Albany when the family returned to Schenectady, working at the State Office Campus in Albany for over 25 years, administering qualifications tests for New York State job applicants. She was a proud career CSEA member and a dependable, conscientious and cheerful co-worker. Her salary, retirement benefits and medical coverage contributed to very comfortable golden years for her and her husband, as they both retired very early and spent summers in the area and winters in Venice, Florida. Services will be held on Saturday July 16th at 8:30 am from the Rossi & Ditoro Funeral Home, Union at N. Jay Streets and then to Our Lady Queen of Peace, Princetown Road, where a Mass will be celebrated at 9:30 am. Entombment will follow at St. Cyril and Method Cemetery, Rotterdam. Friends and relatives are invited and may call at the Rossi and Ditoro Funeral Home on Friday July 15th between the hours of 4 PM and 8 PM. Memorial contributions in Phyllis J. Phillips memory may be made to Community Hospice of Schenectady 1411 Union Street, Schenectady New York 12308.

The family of Phyllis J. Phillips created this Life Tributes page to make it easy to share your memories.

Send flowers to the Phillips family.