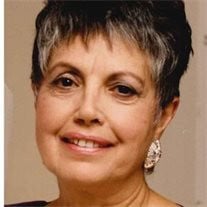 NISKAYUNA - Philomena Ravaioli, 87, passed away peacefully on May 4, 2016 with her daughters by her side. She was born Filomena Palmieri on September 13, 1928 to Crescenzo and Carmina (Torelli) Palmieri in Faicchio Provence of Benevento, Naples, Italy. At the age of nine, she and her mother traveled on the SS Rex to the United States arriving on March 23, 1938 joining her father in Schenectady in pursuit of the American Dream. She entered the Schenectady school system and graduated from Nott Terrace in 1946. On September 21, 1947, she married her husband Mario and together they worked hard to give their two daughters a better life. Philomena retired from GE in 1989 after over 30 years of service as a Technical Clerk for Large Motors and Generators. After retirement, she worked part-time as a demo-lady for Price Chopper which she truly enjoyed as she got to meet and chat with so many people. But her biggest enjoyment was her family, especially her four grandchildren whom she was totally devoted to. Philomena was predeceased by her parents and her husband Mario. She is survived by her daughter, Marie Sciocchetti, son-in-law, Peter, daughter, Gina Sullivan, son-in-law, James; grandchildren, Alyssa (Ryan) Burke, Christopher (Kathryn) Sciocchetti, Ava and Nolan Sullivan; great-grandchildren, Lucas and Emelia Burke; sisters-in-law Susan (Robert) Jones, Virginia (Ernest) Wyatt and Harriett Byrnes. She is also survived by several cousins, nieces, nephews and beloved friends. A Mass of Christian burial will be celebrated at 11:00 am on Saturday, May 7, 2016 at Saint Anthony's Church, Seward Pl., Schenectady, NY. In lieu of flowers, the family requests donations be made to the Alzheimer's Disease Association, at alz.org.

NISKAYUNA - Philomena Ravaioli, 87, passed away peacefully on May 4, 2016 with her daughters by her side. She was born Filomena Palmieri on September 13, 1928 to Crescenzo and Carmina (Torelli) Palmieri in Faicchio Provence of Benevento, Naples,... View Obituary & Service Information

The family of Philomena Ravaioli created this Life Tributes page to make it easy to share your memories.

Send flowers to the Ravaioli family.