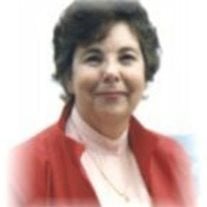 LOUDONVILLE– Nadja Jernakoff, 80, entered peacefully into eternal rest on Sunday after being stricken at home. Nadja was born in Brussels, Belgium on June 3, 1930 the daughter of the late Alexis and Nadine Mitrophan Jmoudsky. Her family immigrated to the United States, settling in New York City where she was educated and graduated from George Washington High School, class of 1948. She married her beloved husband George on September 9, 1951 and together they relocated to Schenectady and later to Loudonville in 1952. She was a homemaker, devoted to her husband and children. Nadja later attended and graduated from SUNY Albany receiving her Masters Degree in education in Russian Language. She went on to become a Professor of Russian Language at Union College retiring in 1995. Nadja was for many years the president of the Association of Russian American Scholars and also held the office of treasurer of the St. Olga’s sisterhood at the Nativity of the Mother of God Russian Orthodox Church, where she was also a member. Nadja had a sincere passion for the Arts, she enjoyed the Opera, classical music and concerts in New York City and throughout Europe. She was a member of an area group that attended various local events. She was a member of a local Bridge Club with other retirees and loved to travel throughout the United States and Europe. She loved spending time with her faithful canine companion, her siberian husky, the late ‘Keemo’. Among all of Nadja’s passions, was the love and enjoyment she received from her garden, watching the flowers bloom. She was predeceased by her husband George Jernakoff in 1995. Survivors include her loving children, Irene Mazzucco and her husband Bill, of Scotia, and Peter Jernakoff and his wife Dr. Katheryn Warren, of Wilmington, DE; adoring grandchildren, Anthony Mazzucco, of Scotia and Melissa and Sasha Jernakoff, of Wilmington, DE; sister-in-law, Irene Selsky, of Annandale, VA; lifelong friend, Walter Giles, of Glenville; dear friend, Margo Beighy, of Clifton Park; beloved neighbor and friend Jeff Glindmyer, of Loudonville; several nieces, nephews and cousins. A Mass will be celebrated on Friday morning at 9 o’clock at the Nativity of the Mother of God Russian Orthodox Church, 617 Sand Creek Road, Colonie, NY 12205 with the Very Reverend Wsevolod Drobot officiating. Interment to follow in the Holy Trinity Monastery Cemetery, Jordanville, NY. Relatives and friends are invited and may call at the Rossi & Ditoro Funeral Home, Union at N. Jay Street, Schenectady, Thursday from 4 to 7 pm. Memorial contributions may be made in Nadja’s memory to honor her Church, The Nativity of the Mother of God Russian Orthodox Church building fund.

LOUDONVILLE&#8211; Nadja Jernakoff, 80, entered peacefully into eternal rest on Sunday after being stricken at home. Nadja was born in Brussels, Belgium on June 3, 1930 the daughter of the late Alexis and Nadine Mitrophan Jmoudsky. Her family... View Obituary & Service Information

The family of Nadja Jernakoff created this Life Tributes page to make it easy to share your memories.

Send flowers to the Jernakoff family.