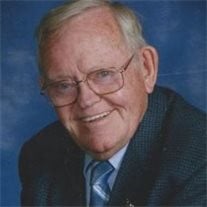 COBLESKILL - Murray George Grant of Cobleskill, New York, passed away Sunday, Mach 29,2015. He was the son of Margaret E. and George Claremont Grant, born October 19, 1927, in Peterborough, Ontario, Canada. Murray earned his Bachelor Degree at University of California, Santa Barbara,California, and his Master's Degree at California State University, Los Angeles. He was raised in Redlands, California, and spent many years in Southern and Northern California. He was a teacher of Social Studies and History for over 35 years. He loved to camp, hike, water ski and visit historical sites, especially Civil War battlefields. He also enjoyed reading and listening to music, especially music of the Big Bands. Murray is survived by his wife of 56 years, Donna Grant and three sons – Bruce Grice and wife Rhonda, of Encinitas, California; Brian Grant of Martinez, California, and Scott Grant of Cobleskill, New York. He is also survived by four granddaughters, Rachel and Marissa Grice and Jenna and Ella Grant. In addition he is survived by many nieces and nephews. Memorial service will be held May 2, 2015, at 2 pm at First Baptist Church, Solid Rock Chapel. Memorial donations may be made to Christian Academy of Prescott. 148 So. Marina St. Prescott, AZ 86303

The family of Murray George Grant created this Life Tributes page to make it easy to share your memories.

Send flowers to the Grant family.