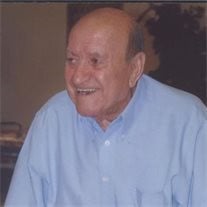 SCHENECTADY- Michael Gizzi, 90, of VanVranken Avenue, entered into eternal peace quietly at home, on Monday surrounded by his devoted family. Michael was born in Fontichiari, Province of Frosinone, Italy a son of the late Joseph and Anna Carpico Gizzi. He immigrated to Schenectady in 1937, working for the railroad and the Van Curler Hotel. Mike honorably served his Country in the US Army during WWII with the military police at Ft. Drum. He worked for the General Electric Company as a large crane operator retiring in 1981 after 40 years of service. He was an avid bowler and enjoyed horse racing, he once won 10 out of 10 races at Saratoga. Mike was devoted to his family and friends he treasured time spent with them and the Sunday dinners at his grandson David’ house. He was a longtime communicant of St. Anthony’s Church. The Gizzi family would like to thank Kim Byrnes, Francine Amiot and the Hospice team for their care and support. Michael was predeceased in 1995 by his beloved wife of 53 years, Theresa Lupi Gizzi; siblings, Rose Gizzi and Bianca Rotundo and his precious grandson Bobby McNulty. Survivors include his devoted children, Jo-Anne and David McNulty, of Glenville, Patricia and Kenneth George, Sr., of Rotterdam and Joseph and Mary Ann Gizzi, of Galway; grandchildren, David and Maryjo McNulty, Jr., Michael and Deborah McNulty, Ronald and Maya McNulty, Kenneth and Andrea George, Jr., Theresa and David Kirchhoff, Jennifer Gizzi, Christine Gizzi and Joseph Gizzi, Jr., great-grandchildren, David and Crystal McNulty III, Julie, Nicole, Anthony, Eva and Alana McNulty, Allison and Emily George and Giana Kirchhoff; sister; Gemma Cacciolfi, of Schenectady and dear friend Celia Cartier, of Amsterdam, several nieces and nephews. Services will be held Friday morning at 9 am from the Rossi & Ditoro Funeral Home, Union at N. Jay Streets, then to St. Anthony’s Church, Seward Place, where a Mass will be celebrated at 10 am. Interment with Military Honors will follow in St. John the Baptist Cemetery, Brandywine Avenue. Relatives and friends are invited and may call at the Rossi & Ditoro Funeral Home, Thursday evening from 5 to 8 pm.

SCHENECTADY- Michael Gizzi, 90, of VanVranken Avenue, entered into eternal peace quietly at home, on Monday surrounded by his devoted family. Michael was born in Fontichiari, Province of Frosinone, Italy a son of the late Joseph and Anna Carpico... View Obituary & Service Information

The family of Michael J. Gizzi created this Life Tributes page to make it easy to share your memories.

Send flowers to the Gizzi family.