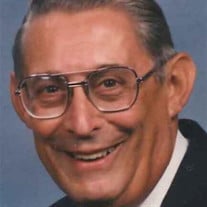 Schenectady - Michael Pasquale DiCerbo, 86, of Central Parkway, entered peacefully into the arms of the Lord Thursday, February 14, 2019. Born in Schenectady on July 13, 1932 to the late Pasquale and Sadie DiCerbo. Graduate of Mt Pleasant High School, Michael was a member of the New York National Guards and New York State Reserves. He was a commissioned Officer in both NYNG and NYSR from 1954 – 1960. Michael went onto a career at General Electric and retired from Knolls Atomic Power Laboratory in 1993. Michael met and married his wife Carmela “Carol” Isgro while working at Knolls Atomic Power Laboratory. He was a very proud father of two daughters, their husbands and six grandchildren. Michael was a very active member of his community. He was a member of St. Anthony’s Church for 56 years holding various volunteer positions within the church such as office volunteer, Eucharistic minister, member of the Festa committee and St. Anthony’s Holy Name Society. Michael was a member of the Italo- American Society, Schenectady 1st Friday Club, Rotterdam ELK Lodge #2157 and Sons of Italy. Michael was also very involved in the Schenectady County Democratic Party. He served as a committee person for 20 years earning the Harry S. Truman Award and was a member of the Schenectady County and City of Schenectady Executive committees. He was a volunteer at the New York State Democratic Party Nominating Convention in 2000. Michael was a volunteer at Schenectady Proctor’s Theatre as an usher, the White Hats and the Guild Room. Michael was predeceased by his parents Pasquale and Sadie DiCerbo, sister Philomena DiCerbo Zautner, his God Daughter Nadine Conde Kilcullen, nieces Theresa and Kimberly DiCerbo and lastly but most recently his wife for 55 years, Carmela “Carol” Isgro DiCerbo. Survived by daughters, Michele Marie Martinelli (David) and Lisa Marie Foland (Marc). Grandfather of four boys and two girls, Dominic Martinelli, Nicholas Foland, Michele Foland and triplets, Angelo, Gino and Julie Martinelli. Sisters: Lydia DiCerbo, Rosemarie DiCerbo Conde, brother, Carl DiCerbo (Nancy), and brother & sister in-law Robert Isgro (Carole) and many cousins, nieces, nephews, great nieces and nephews along with many, friends. Services will be held on Monday at 10 am from the Rossi & Ditoro Funeral Home, 501 Union Street and then to St. Anthony’s Church, Seward Place, where a Mass of Christian Burial will be celebrated at 11 am. Interment will follow in St. John the Baptist Cemetery. Relatives and friends are invited to call at the Rossi & Ditoro Funeral Home, on Sunday from 2pm – 5pm. For those wishing, memorial contributions may be made in Michael’s memory to St. Anthony’s Church Restoration Fund.

The family of Michael Pasquale DiCerbo created this Life Tributes page to make it easy to share your memories.

Send flowers to the DiCerbo family.