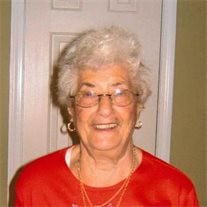 Rotterdam – Mary Caffarella Derenzo, 91, of Curry Road, died on Monday, April 28th, at home, surrounded by her loving family. Mary was born in Puglianello, province of Benevento, Italy on April 6, 1923, the daughter of the late Gaetano and Marinatte Cacchillo DeTullio. She was raised by her mother Marinatte and step-father Frank Della Selva. She immigrated to the United States on the Augustus in 1932, with her sister Antoinette, to be reunited with her family in Schenectady. She was educated at Mont Pleasant High School and for several years she worked at Newberry Knitting Mill where she made gloves. Mary was later employed at Mohonasen and Bradt Schools, working as a matron retiring in 1979. She married her beloved Tony on May 19, 1979 and together they enjoyed vacationing at their camp on Sacandaga Lake and also traveled to various destinations throughout their marriage. Mary loved to cook and bake for her family. In her 70's she was still hosting large Thanksgiving and Christmas dinners. She was well known for her green thumb and beautiful flowers. Mary always loved music and often played the organ during family get-togethers. She was a devout catholic and a member of St. Gabriele's Choir for 22 years. She loved children of all ages and at 80 years young, she volunteered at Bradt School where she was fondly known as "Grandma Mary". In addition to her parents and step-father, Mary was predeceased by her beloved husband Anthony 'Tony' Derenzo, Sr. and her former husband John Caffarella, Sr.; siblings, Tulio DeTullio and Rose Cassillo and a step-son James Derenzo. She is survived by her devoted children, Anna Marie Symanski and her husband Michael, of Rotterdam and John Caffarella, Jr. and his wife Sandy, of Rotterdam; step-sons, Anthony Derenzo, Jr., and Patrick Derenzo and his wife Lynne, all of Schenectady; siblings, Antoinette Aldi, Flora Mannato and Helen Quattrociocchi; 7 grandchildren, 4 great-grandchildren; 9 step-grandchildren and 13 step-great-grandchildren. Her grandchildren were her pride and joy. She also left behind a host of nieces and nephews with whom she was very close to. The family extend their gratitude to Schenectady Hospice, especially to Joanne, Amber and Cindy and imparts a heartfelt thank you to Raj who started as Mary's personal aide and quickly became part of the family. They also appreciate Tina's ceaseless devotion to her Aunt Mary. Services will be held Thursday at 9 am from the Rossi & Ditoro Funeral Home, Union at N. Jay Streets, and then to St. John the Evangelist Church, Union St., where a Mass of Christian Burial will be celebrated at 10 am. Interment will follow in St. John the Baptist Cemetery. Relatives and friends are invited and may call at the Rossi & Ditoro Funeral Home on Wednesday day from 4 to 7 pm. Memorial contributions may be made in Mary's memory to Community Hospice of Schenectady, 1411 Union Street, Schenectady, NY 12308 or to St. Jude's Children's Hospital, 50l St. Jude Place, Memphis, TN 38105.

Rotterdam &#8211; Mary Caffarella Derenzo, 91, of Curry Road, died on Monday, April 28th, at home, surrounded by her loving family. Mary was born in Puglianello, province of Benevento, Italy on April 6, 1923, the daughter of the late Gaetano... View Obituary & Service Information

The family of Mary Caffarella Derenzo created this Life Tributes page to make it easy to share your memories.

Send flowers to the Derenzo family.