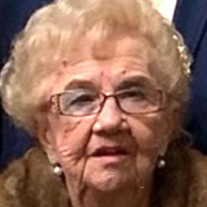 ROTTERDAM – Mary ‘Connie’ Daversa, 88, peacefully entered into eternal rest at home on Sunday, July 18, 2021, surrounded by the love of her family. Mary was born in Brooklyn, a daughter of the late Francis and Margaret Bovaird Keenan. While working in New York City, as chance would have it, Mary met a tall, strapping, and handsome young man from Schenectady. She would later relocate to marry her Alex, the love of her life. For a short period, Mary worked at ALCO before becoming a devoted wife and mother. In 1995 she retired as the Registrar of Ellis Hospital School of Nursing, after 23 years. Mary was a strong and determined woman, whose legacy of love, sacrifice and compassion will leave a memory in the hearts of those she cherished so dearly. She poured her heart into helping others; she was a dedicated caregiver to her mother, husband, grandchildren and anyone in need. She enjoyed traveling and visiting the casino. As a staunch Roman Catholic, Mary lived by and instilled in her family, Christian values and tradition. She was a communicant of the former Holy Cross Church and later St. Anthony’s Church. She was predeceased Alexander A. Daversa, whom she married on May 31, 1958, until his passing on January 31, 1988; a brother, Francis B. Keenan; son-in-law, Paul C. Coppola; and life-long friend, Theresa Roche. Mary is survived by her loving and devoted family; children, Sandra Daversa Jarish and her husband Thomas Jarish, John Daversa and his wife, Cynthia Blakely, Alyssa Daversa and her husband Anthony ‘Bob’ Russo, and Margaret Coppola Dagostino and her husband, Dominic Dagostino; grandchildren, Paul A. (Jacqueline) Coppola, Daniel Coppola, Michael Dagostino, Ryan Jarish and Shawn Jarish, Alex Daversa-Russo, Abigail Daversa-Russo, Michaela Daversa, Nicholas Daversa, and Casey Daversa, a sister, Mary Josephine Murtie; several nieces and nephews. Services will be held on Thursday at 10 am from the Rossi & Ditoro Funeral Home, 501 Union Street, followed by a Mass of Christian Burial at 11 am at St. John the Evangelist Church, Union Street. Interment will follow in Most Holy Redeemer Cemetery. Relatives and friends are invited and may call at the Rossi & Ditoro Funeral Home on Wednesday from 4-8 pm. Memorial contributions may be made in Mary’s memory to St. John the Evangelist Church, 806 Union St., Schenectady, NY 12308.

ROTTERDAM &#8211; Mary &#8216;Connie&#8217; Daversa, 88, peacefully entered into eternal rest at home on Sunday, July 18, 2021, surrounded by the love of her family. Mary was born in Brooklyn, a daughter of the late Francis and Margaret Bovaird... View Obituary & Service Information

The family of Mary 'Connie' Keenan Daversa created this Life Tributes page to make it easy to share your memories.

Send flowers to the Daversa family.