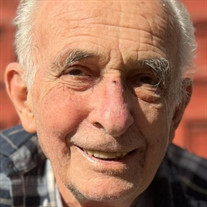 SCHENECTADY – Lifelong Stockade resident, ‘Marty’ Nicholas M. Colangelo, 84, entered peacefully into eternal life on Monday, January 3, 2022, holding his beloved wife’s hand. Marty was born in Schenectady, a son of the late Nicholas and Catherine Alice Burns Colangelo. He was a 1956 graduate of Nott Terrace High School and served in the US Army in the 101st Airborne Infantry as a paratrooper. Marty worked for the City of Schenectady in the sign division, retiring after 43 years as a supervisor with the Bureau of Services. Throughout his adult life, Marty pursued his education, attending HVCC, SCCC, and Union College, enhancing his already vast knowledge. Marty was known for his sense of humor, practical jokes, playfulness, and compassionate personality. He was an avid outdoorsman, which he so passionately shared with his children and grandchildren, as well as his compassion and love for all of God’s creatures; especially his many dogs, the ducks he fed, the guinea pigs, even the damn cat. Marty formed many loyal friendships throughout his lifetime and shared many a day with them at Mike’s Hot Dog’s and Stewarts. Marty’s legacy left to shine bright for all who know him will be of a truly kind, gentle, funny, compassionate, and empathic man. Left to mourn and celebrate his memory is his beloved wife of 62 years, Connie DiGesualdo Colangelo, whom he eloped with on July 14, 1959; his loving and devoted children, Peter (Lana) Colangelo, and Debra (Matthew) Volks; he was an adored ‘Poppy’ to Matthew (Ebony Lawyer) Volks, Alicia (Ben) Ragucci and Elizabeth Volks, his loving brother, Theodore F. (Doreen) Colangelo; a niece, cousins and many dear friends. A Mass of Christian Burial will be celebrated at 11 am on Monday at St. John the Evangelist Church, Union Street. Interment will follow in the Gerald BH Solomon Saratoga National Cemetery, at 1:30 pm. For those who wish, memorial contributions may be made in Marty’s memory to Homeward Bound Dog Rescue, 33 John St., Schenectady, NY 12305.

The family of "Marty" Nicholas M. Colangelo created this Life Tributes page to make it easy to share your memories.

Send flowers to the Colangelo family.