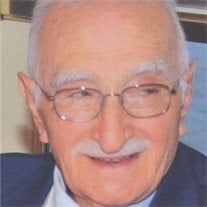 Schenectady - Martin Armand Bianchi, 93, of Carrie Street went home peacefully to his Lord on January 14, 2014 after a brief illness. Armand was born in Schenectady on November 11, 1920 to the late Agnese Qualiere Bianchi and Vincenzo Bianchi. His family returned to live in his family's hometown of Arpino, Italy when Armand was just six months old. He returned in 1937 as a teenager to build a better life for himself and his future family. He is survived by his loving son, Vincent Bianchi, his beloved granddaughter, Lisa, and her fiancée Jason Merritt. He is also survived by two sisters-in-law, Laura D'Ammasso of Schenectady and Delia Landolfo Bianchi of Arpino and several nieces and nephews. Among them, his beloved Amelia and Bunny Pedone , Evelyn and Bob James and Bonnie and Muzzy Bianchi. He is also "Uncle Armand" to many friends and acquaintances. He was predeceased by his loving wife, Rosina, to whom he was married for 55 years and his beloved daughter-in-law, Tina. He was also predeceased by his five siblings. Armand served in the U.S. Army Corps of Engineers during World War II, seeing action in the European Theater in the battles of Southern France, Belgium, and The Rhineland. After being honorably discharged from the Army, Armand worked as a pipefitter at Alco Products, Inc. and the General Electric Company for 28 and 18 years respectively. He was a proud member of the Alco Products Quarter Century Club, the Laziale Society, and American Legion Post 21. Armand was a daily communicant of St. Anthony's Roman Catholic Church of Schenectady and a longtime member of the Holy Name Society at St. Anthony's. Armand had many talents. Aside from his job as a pipefitter/plumber, Armand was equally comfortable at carpentry, electrical work, masonry, and shoemaking. Above all, he enjoyed working in his garden, (even at the age of 92) and making his own wine. In his later years, Armand became "famous" for his biscotti and pepper cookies that he baked from scratch for all his friends. Above all, Armand will be remembered for his kind spirit and friendly personality. Everyone who knew him or just met him for a brief time, recognized that he was a special person. Calling hours will be held on Friday, January 17th from 3:00pm to 7:00pm at St. Anthony's Roman Catholic Church on Seward Place in Schenectady. A Mass of Christian Burial will be held at the church on Saturday morning at 9:30 a.m. followed by internment with military honors at St. John the Baptist Cemetery. Armand's son respectfully asks anyone who wishes to bring food to the family, that in lieu of this kind gesture, to please consider a donation to a Food Pantry of your choice in Armand's memory. Contributions in his memory may also be made to the St. Anthony's Church Memorial Fund or to a charity of your choice.

Schenectady - Martin Armand Bianchi, 93, of Carrie Street went home peacefully to his Lord on January 14, 2014 after a brief illness. Armand was born in Schenectady on November 11, 1920 to the late Agnese Qualiere Bianchi and Vincenzo Bianchi.... View Obituary & Service Information

The family of Martin Armand Bianchi created this Life Tributes page to make it easy to share your memories.

Send flowers to the Bianchi family.