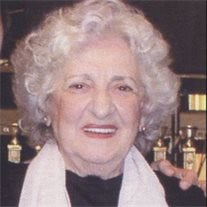 SCHENECTADY – Mrs. Marion D. Cavaliere Lattanzio, 84, formerly of Park Place, went to be home with her Lord and beloved family in heaven, Saturday evening at Ellis Hospital. Mrs. Lattanzio was born in Schenectady on January 10, 1926, the daughter of the late Angelo and Constance Campano Cavaliere. She graduated from the former Nott Terrace High School, Class of 1944. She worked in the family business, Cavaliere’s on Van Vranken Avenue, for over 40 years. She was later employed at St. Clare’s Hospital where she worked as a secretary in the Emergency Room. And then for the City of Schenectady Police Department in the same capacity, for 10 years. Mrs. Lattanzio was a volunteer for the City Mission and the Schenectady Inner City Mission. She was a communicant of St. Anthony’s Church, where she was a member of its Sacred Heart League. Mrs. Lattanzio joyfully took part in the church’s annual “Festa”. Marion was predeceased by her beloved husband Louis T. Lattanzio, whom she married July 1, 1945 and he died October 20, 2003; and her beloved sister and brothers, Lee Rockefeller, Carl Cavaliere and Angelo Cavaliere, Jr. Survivors include her loving daughter, Toni and her husband Barry Feinman of Niskayuna; three devoted siblings, Dorothy Falvo of Schenectady, Edith Cavaliere Furman of Gloversville, Richard Cavaliere of Kirkland, WA; her treasured grandchildren, Stacey and her husband Brett Lauren Kennedy, Laina and her husband Stephen Goley and Jordan Feinman; her adoring great-grandchildren, MeKenzie, Zachary and Delaney Goley. She is also survived by many beloved nieces and nephews who fondly called her ‘Bibs’. Relatives and friends are invited and may call at the Rossi & Ditoro Funeral Home, Wednesday evening from 4 to 8 PM. Members of the Sacred Heart League and the Bereavement are asked to meet at 5:30 PM. Services will be held Thursday morning at 10 AM from the Rossi & Ditoro Funeral Home, Union at N. Jay Streets and then to St. Anthony’s Church, Seward Place, where a Mass will be celebrated at 11 AM. Interment will follow in St. Anthony’s Cemetery, Glenville. Memorial Contributions may be made in Marion’s memory to Jezreel International, a humanitarian aide organization, 18 Kairnes Street, Albany, NY, 12205.

The family of Marion Cavaliere Lattanzio created this Life Tributes page to make it easy to share your memories.

Send flowers to the Lattanzio family.