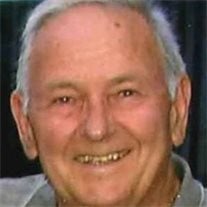 Obituary for Mario Mascitelli Please publish on Tuesday and Wednesday with 2 photo's NISKAYUNA –Mario Mascitelli, 83, after a miraculous heroic recovery from a dismal diagnosis 22 months ago, entered peacefully into eternal rest early Monday morning at Ellis Hospital, surrounded by his devoted family. Mario, a son of the late Michele and Concetta Ferrante Mascitelli, was born in the Abruzzi Region of Italy, in the town of Rapino, Province of Chieti, on June 18, 1930. He immigrated to the United States in 1950, in search of opportunity, settling in Schenectady, with other family and friends. With many obstacles, including language, Mario was able to obtain a job with ALCO, the General Electric Company and then began apprenticing for Fazzone Construction Company, specializing in masonry work. In 1960, he and his brother Gino, founded Mascitelli Brother's, General Mason Contractors, where they worked side by side, building many homes in the capital region. Mario later worked for M.V.P. Construction Company. Mario was proud of his Italian heritage, but equally proud to be an American. He was a faithful man, dedicated to providing for his devoted family, who were most important to him. He leaves them his legacy of integrity, strength, and commitment. He was a member of the Local Bricklayers Union; Gabriel D'Annunzio Lodge, Order of the Sons of Italy of America #321; a devout communicant of St. Anthony's Church and St. John the Evangelist Church and a member of The Holy Name Society of St. Anthony's. He enjoyed traveling, and was an award winning wine maker. The Mascitelli family is grateful to Dr. Avi Alin for his encouragement and dedication to their father and to the entire staff of Ellis Hospital for their expert care. Mario was predeceased by his beloved wife of 38 years, Filomena Levito Mascitelli, who he married October 28, 1948, together they raised and enjoyed their three beautiful children. Filomena passed away on February 21, 1987; his beloved second wife of 23 years, Josephine DeLeonardis Sciocchetti Mascitelli, who were married July 15, 1989 and she later died February 8, 2013. He was also predeceased by his siblings Antoinette Cinosi, Julia Ferrante, and Giuseppe Mascitelli. Mario is survived by his loving children, Josephine Barone and her husband Daniel and Marianne McGiffin and her husband Steven all of Ft. Myers, FL, and Michael Mascitelli and his wife Angela of Rotterdam; adoring grandchildren, Christina Monty, Michelle Owens, Tina Major, Philip, Amanda, and Bianca Mascitelli; great-grandchildren, Antonio and Mario Monty and Maddox and Claire Owens; his brother, Gino Mascitelli, (whose respect and love for Mario was so apparent, especially with his daily visits, and devotion. ) his wife Dorothy and their sons, Michael and Anthony; several nieces, nephews and friends also survive. Services will be held at 12 noon on Thursday from the Rossi & Ditoro Funeral Home, Union at N. Jay Street then to St. Anthony's Church, Seward Place where a mass will be celebrated at 1 pm. Entombment will follow in Evergreen Memorial Park, Colonie. Relatives and friends are invited and may call at the Rossi & Ditoro Funeral Home on Wednesday from 4 to 8 pm. Memorial Contributions may be made in Mario's memory to St. Anthony's Church, 331 Seward Place, Schenectady, NY 12305, or St. John the Evangelist Church, 816 Union St., Schenectady, NY 12308. For information and online condolences, please visit www.rossiditorofuneralhome.com.

The family of Mario Mascitelli created this Life Tributes page to make it easy to share your memories.

Obituary for Mario Mascitelli
Please publish on Tuesday and Wednesday...

Send flowers to the Mascitelli family.