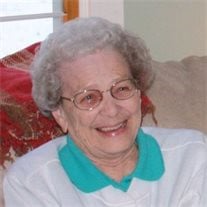 HALFMOON – Margaret M. 'Peggy' Brisson, 89, entered into the arms of the Lord on Saturday, March 12, 2016 at home, surrounded by her loving daughters. Peggy was born in Albany on February 27, 1927 a daughter of the late George and Margaret (Pike) Lauer. She worked as a clerk for several years at local markets and then for SUNY, APC in Albany, retiring after several years of service. Peggy was a kind hearted, gentle and loving woman. She enjoyed bowling in Vince's Auto Electric and Camp's Women's bowling leagues. She treasured the time she spent vacationing each summer at Queens Village in Warrensburg and loved to relax with her needlepoint, most often sharing her creations with those she loved. Peggy was a devoted catholic and a communicant of St. Mary's Church in Waterford. In addition to her parents, Peggy was predeceased by her beloved husband, William 'Bill' Brisson whom she married on June 30, 1945 and he later died on June 20, 2001 and her cherished daughter, Barbara Wright Vandenburgh. She is survived by her loving daughters, Janet Lynch and her husband Dan, and his sons, Daniel and Charles Lynch, all of Clifton Park and Kathy Brisson, of Halfmoon; adoring grandchildren, Kim Austin and her husband Brian and Anne Marie Vandenburgh and her wife Paula Kniskern; great-grandchildren, Christopher and Andrew Austin and Amanda and Jared Hei; a brother-in-law, Vince Chonski, and his late wife Joyce, of Clifton Park and her four legged faithful companions, Snuggles and Sassy. Many loving cousins, nieces, nephews and friends also survive. Funeral services will be held on Tuesday at 9:30am from the Philip J. Brendese Funeral Home, 133 Broad Street, Waterford and then to St. Mary's of the Assumption Church Broad Street, where a Mass will be celebrated at 10:30 am. Interment will follow in St. Joseph's Cemetery, Waterford. Relatives and friends are invited and may call Monday at the Philip J. Brendese Funeral Home, 133 Broad Street, Waterford from 4:30 to 7:30 pm. Memorial contributions may be made in Peggy's memory to Community Hospice, 295 Valley View Blvd., Rensselaer, NY 12144 or online at communityhospice.org

HALFMOON &#8211; Margaret M. 'Peggy' Brisson, 89, entered into the arms of the Lord on Saturday, March 12, 2016 at home, surrounded by her loving daughters. Peggy was born in Albany on February 27, 1927 a daughter of the late George and Margaret... View Obituary & Service Information

The family of Margaret M. 'Peggy' Brisson created this Life Tributes page to make it easy to share your memories.