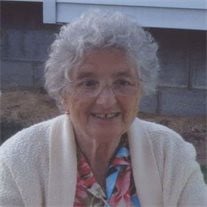 SCHENECTADY –Mafalda Mareno, 83, entered into eternal peace on Sunday at the Baptist Nursing and Rehabilitation Center. Mafalda was born in Monte San Giovanni Campano, Province of Frosinone, Italy on August 14, 1928 a daughter of the late Alberto and Concetta Paolucci Bursi. She immigrated to the United States in 1949, settling in Schenectady. She worked for the VNSA, retiring after 25 years of service. Mafalda was a woman of strong faith, whose legacy was being a loving and devoted wife, mother and grandmother. She enjoyed cooking, gardening, traveling and doing ceramics. The Mareno family would like to extend a heartfelt thank you to Dr. Ringler and staff of the Baptist Nursing and Rehabilitation Center, the crews of Mohawk Ambulance and the Emergency Room Staff at Ellis Hospital for their wonder and attentive care of our mother. She was predeceased by her beloved husband, Frank Mareno, Jr. whom she married September 24, 1950 until his death October 27, 1999 and her sister Elia Farini. Survivors include her loving sons, Michael Mareno and his wife Lise, of Schenectady, Frank Mareno and Donald A. Mareno and his wife Mary Anne, all of Rotterdam; siblings, Aldo Bursi and his companion Elinor Macari, of Rotterdam and Anthony Bursi, of Albany; adoring grandchildren, Michael Mareno and his wife Kristina, Lisa Mareno and Dean Engert, Alexandra Mareno, Kristen Lee Mareno and Marlena Mareno; great grandchildren, Rocco Mareno, Hayden Engert, Santino Mareno and Adam Engert; daughter-in-law Carla Mareno; many nieces and nephews. Services will be held Wednesday morning at 9 am from the Rossi & Ditoro Funeral Home, Union at N. Jay Street and then to St. Anthony's Church, Seward Place, where a Mass of Christian Burial will be celebrated at 10 am. Interment to follow in St. John the Baptist Cemetery, Brandywine Avenue. Relatives and friends are invited and may call at the Rossi & Ditoro Funeral Home Tuesday evening from 5 to 8 pm. Memorial contributions may be made in Mafalda's memory to St. Anthony's Church or St. Jude's Children's Hospital, 501 St. Jude's Place, Memphis, TN 38105.

SCHENECTADY &#8211;Mafalda Mareno, 83, entered into eternal peace on Sunday at the Baptist Nursing and Rehabilitation Center. Mafalda was born in Monte San Giovanni Campano, Province of Frosinone, Italy on August 14, 1928 a daughter of the late... View Obituary & Service Information

The family of Mafalda Mareno created this Life Tributes page to make it easy to share your memories.

Send flowers to the Mareno family.