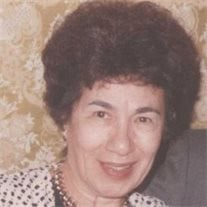 SCHENECTADY – Madeline R. Gatti, died peacefully on Friday, June 7, after a lengthy illness. The daughter of the late Vincenzo (Vincent) Ruggiero and Petronilla (Nellie) Vasta Ruggiero, Madeline graduated from the former Nott Terrace High School and Mildred Elley Business School. She was employed by the Prudential Insurance Co. for 33 years. When she retired in 1979, she married Dr. Arno Gatti and moved to Norristown, PA. While living there, she volunteered at the Norristown State Hospital and was active in the Forteniters Club, a social club for discharged patients. She and her husband returned to Schenectady in 1989. Madeline was a long-time member of the First United Methodist Church in Schenectady. In addition to her parents, she was predeceased by her husband, who died in 2000, and by a dear cousin, Virginia Samler. She is survived by her son, Mark Cusano and his wife Mary Ellen of Niskayuna and by her brother, Ralph Ruggiero and his wife Irene of Schenectady. She is also survived by a niece, Tina Grayson and her husband Jeff, of Chantilly, VA and their children Samantha Miller (Brendan) and Lucas Grayson. She also leaves behind dear friends, Elaine Smith and Jackie Preddice who, along with many others, were so supportive throughout her life. Her family would like to thank all those who cared for Madeline during her illness, particularly Rosemarie Coleman of Schenectady. In keeping with her wishes, there will be no public calling hours. A graveside service will be held at Memory Gardens in Colonie, officiated by Rev. Daniel Ling. Memorial contributions may be made to City Mission of Schenectady or Community Hospice of Schenectady.

The family of Madeline R. Gatti created this Life Tributes page to make it easy to share your memories.

Send flowers to the Gatti family.