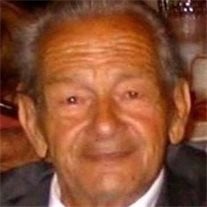 ROTTERDAM - Louis Miranda, 78, passed peacefully into eternal rest on Monday, January 26, 2015 at Ellis Hospital, surrounded by his devoted family. Louis was born in Dragoni, Italy on December 7, 1936, a son of the late Joseph and Anna Miranda. After immigrating in 1952, Louis honorably served in the US Army and received his A.D. at Albany Business School. He owned and operated Miranda's Banquet Room in Scotia for over three decades, doing what he did best: enabling others to celebrate life. Louis was also predeceased by his beloved mother Nicolina Miranda; his brother, Michael Miranda; and his sister and brothers-in-law, Betty and John Anastasio and Maurizio Cusano. Above all, his greatest joy in life was his family. Louis is survived by his devoted wife of 54 years, Mary Cusano Miranda; devoted daughters Annalisa Miranda and Kim Lohraseb and her husband Ray all of Rotterdam; adoring grandsons Louis and Jason Lohraseb; loving siblings, Antoinetta Cassale and her husband Felix, Gilda Benacquista and her husband Guy, Ida Benice and her husband Anthony, Pasquale Miranda and his wife Patricia, Anna Miranda, Elio Miranda and his wife Marlene, and Deborah Curto and her husband Arthur; brothers and sisters in-law, Rita Miranda, Domenico and Frances Cusano, JoAnn and Romeo Niro, Angela DiCocco, Joseph Perretta and Eileen Buono, Ida and David Tessitore, and Carol Cusano; many godchildren, nieces, nephews, cousins, and countless friends and neighbors who were touched by Louis' warmth and sense of humor. The Miranda family is eternally grateful to the staff at Fresenius Dialysis Center for the exemplary care given to Louis over the years. Services will be held on Friday from the Rossi & Ditoro Funeral Home, 501 Union Street (corner of N. Jay) at 12 noon and then to St. John the Evangelist Church, Union Street, where a Mass of Christian Burial will be celebrated at 12:30pm, entombment will follow in Sts. Cyril & Method Cemetery, Rotterdam. Relatives and friends are invited and may call at the Rossi & Ditoro Funeral Home on Friday from 9:00am—12:00pm.

ROTTERDAM - Louis Miranda, 78, passed peacefully into eternal rest on Monday, January 26, 2015 at Ellis Hospital, surrounded by his devoted family. Louis was born in Dragoni, Italy on December 7, 1936, a son of the late Joseph and Anna Miranda.... View Obituary & Service Information

The family of Louis Miranda created this Life Tributes page to make it easy to share your memories.

Send flowers to the Miranda family.