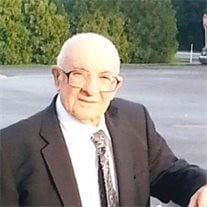 SCHENECTADY – Louis A. Mell, 93, passed away peacefully on Monday, July 18, 2016 after a long illness Louis was born in South Schenectady on September 14, 1922, a son of the late Andrew and Mary (Fiorentino) Mell. He was a graduate of Draper High School and enlisted in the US Navy. He was an extremely proud veteran serving in WWII in the Asiatic, Pacific and Atlantic. Lou worked several years for ALCO before joining his father in the electrical contracting business, A. Mell & Son. He retired as President of Mell Electric, Inc. 1988, leaving his successful business in his son Mark's capable care. In his retirement, he enjoyed fishing, gardening and was an avid horse racing enthusiast. Louis was a former member of the Gabrielle D'Annunzio Lodge, Order of the Sons of Italy Lodge and a communicant of St. Paul the Apostle Church. The family wishes to extend their heartfelt thanks to the Silver Team and staff at the Stratton VA Medical Center for the outstanding care provided to Lou throughout the course of his illness, also as well as the support of Community Hospice. Louis was predeceased by his wife Margaret Pellegrino Mell and a sister, Mary Mennillo. He is survived by his loving and devoted children, Karen Mell, of Clifton Park, Gary (Celine) Mell, of Schenectady and Mark (Lynn) Mell, of Rotterdam; grandchildren, Steven (April) Mell, Jessica Gamache, Susan (Dan) Knightes, Ross (Jessica) Martin, Erika Martin and Rachel Aldana; great-grandchildren, Dylan and Alex Mell, Natalya Aldana, Sophia Knightes and Brycen Gamache; his sister-in-law, Edith Pell and numerous nieces and nephews. Services will be held on Friday at 10 am from the Rossi & Ditoro Funeral Home, 501 Union Street and then to St. Paul the Apostle Church, where a Mass will be celebrated at 11am. Entombment will follow in Most Holy Redeemer Cemetery, Niskayuna. Relatives and friends are invited and may call at the Rossi & Ditoro Funereal Home on Thursday from 4 to 8 pm. In lieu of flowers, the family respectfully requests donations in Lou's memory be made to the Joan Nicole Prince Home, 22 Glenview Drive, Scotia, NY or "Donations can be made in Louis Mell's memory to the Stratton VA Voluntary Service Office, Homeless Veterans Assistance, 113 Holland Avenue (135), Albany, NY, 12208."

SCHENECTADY &#8211; Louis A. Mell, 93, passed away peacefully on Monday, July 18, 2016 after a long illness Louis was born in South Schenectady on September 14, 1922, a son of the late Andrew and Mary (Fiorentino) Mell. He was a graduate of... View Obituary & Service Information

The family of Louis A. Mell created this Life Tributes page to make it easy to share your memories.

SCHENECTADY – Louis A. Mell, 93, passed away peacefully on Monday,...

Send flowers to the Mell family.