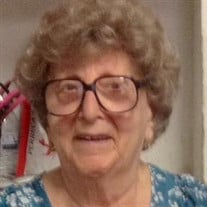 BALLSTON LAKE – Lilia “Lillian” Perreca Papa, 93, the true matriarch of Perreca’s Bakery, passed into the arms of the Lord on Wednesday March 20, 2019, at her daughter’s home, surrounded by the love and peace of her family. Lilia was born in Schenectady on May 16, 1925 a daughter of Salvatore and Carmella DeRosa Perreca, the founders of Perreca’s Bakery, the Capital Region landmark known for its old-world style brick oven baked bread. As a young girl, Lilia began work in the bakery at the age of 9 and later became the true driving force behind its continued success. Charity has always been at the forefront to Lilia, she maintained that it was the responsibility of the business to give back to the community, an obligation which she happily embraced. In addition to her community outreach, each day the overage of bread and tomato pie from the bakery was distributed to homeless shelters and those in need. She led a full life, one devoted to her faith, family and community. Lilia was a devout communicant of Our Lady of Grace Church since 1950; and a former member of the choir. It is with heartfelt gratitude that the family extends their thanks to Fr. Richard A. Carlino, Joan Campano and Sylvana DiLeva, for the compassion, care, support and love. Lilia was predeceased by her husband Dominick Papa; brother, Mario Perreca and a niece Kim Mastroianni. She is survived by her loving and dedicated children, Tony Papa and Maria Papa; cherished grandchildren, Anthony Papa, Kipling Papa Silveria and Nicholas Papa; faithful sisters, Clara Perreca Caiozzo and Teresa Perreca. A Mass of Christian Burial will be celebrated on Saturday at 10:30 am at St. Anthony’s Church, Seward Place, Schenectady. Interment will follow in St. John the Baptist Cemetery, Brandywine Avenue. Relatives and friends are invited and may call at the Rossi & Ditoro Funeral Home on Friday from 4 to 7 pm. Memorial contributions may be made in Lilia Papa’s memory to Community Hospice, 310 S. Manning Blvd., Albany, NY 12208 or Catholic Charities, 1462 Erie Blvd, Schenectady, NY 12305.

The family of Lilia "Lillian" Perreca Papa created this Life Tributes page to make it easy to share your memories.