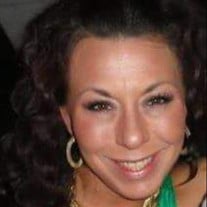 DANVERS, MA – Liana M. LaMountain-McCarthy, 35, entered into eternal rest on Thursday, September 6, 2018, after being stricken on Sunday, at Ellis Hospital, where the first ever Honor Walk was held as Liana and her loved ones were escorted from the ICU to the Surgical Suite. Surgeons from around the country, nurses and staff were involved in Liana’s organ procurement. Although her passing is grieved by many, her gift of life through organ donation to four families is celebrated. Liana was born at St. Peter’s Hospital on January 3, 1983, a loving and cherished daughter of Tina LaMountain and the late John Michael Mahoney. She graduated from Scotia-Glenville High School where she participated as a cheerleader. She loved and triumphed in her career as a Tenant Coordinator for both Georgetown and Toppsfield Housing Authority in MA. Liana was an avid dancer with amazing rhythm and moves. She embraced life and lit up the room with her energetic personality; she enjoyed socializing with her nieces, nephews; vacationing and was anticipating her planned trip to Jamaica. Liana was predeceased by her loving father, Jack M. Mahoney on December 27, 1989; grandparents, George LaMountain and Jerry and June Mahoney. She is survived by her beloved husband and best friend, Stephen McCarthy, whom she married on July 4, 2014; devoted and loving parents, Tina and Randy VanBuren, of Scotia; loving mother and father-in-law, David and Jane McCarthy, of Burnt Hills, loving brother, Sean M. (Valerie) Mahoney and their children, Taylor, Jackson, and Jamison; grandmother Shirley LaMountain; brother’s in-law, Michael (Kristina) McCarthy and their children, Nate and Julian and Andrew (Emily) McCarthy; several aunts, uncles, cousins and dear friends. Services will be held on Monday at 7 pm at the Rossi & Ditoro Funeral Home, 501 Union Street, Schenectady. Relatives and friends are invited to call at the Rossi & Ditoro Funeral Home on Monday from 4 to 7 pm.

DANVERS, MA &#8211; Liana M. LaMountain-McCarthy, 35, entered into eternal rest on Thursday, September 6, 2018, after being stricken on Sunday, at Ellis Hospital, where the first ever Honor Walk was held as Liana and her loved ones were escorted... View Obituary & Service Information

The family of Liana M. LaMountain-McCarthy created this Life Tributes page to make it easy to share your memories.

Send flowers to the LaMountain-McCarthy family.