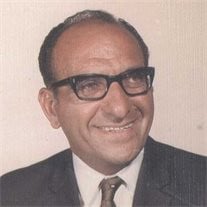 SCHENECTADY – Lewis, J. Valentino, 91, passed peacefully into the arms of the Lord on Thursday at his residence with his loving family at his side after a long illness. Lewis was born and raised in the Goosehill neighborhood, a son of the late Dominick and Sperenza Mariello Valentino. He attended Oneida elementary school and was a graduate of Nott Terrace High School. He enlisted in the US Army in 1941 and honorably served his country until 1945. Lew was a Pearl Harbor survivor and a recipient of the American Defense Service Medal with a Bronze Star. Lew was employed by the City of Schenectady in the street maintenance department, retiring as a supervisor after 37 years of service. For 22 years after retirement he worked as a courier for Best Systems in Albany. Lew loved the outdoors, he managed Babe Ruth and Pop Warner leagues, for his entire life he loved to hunt, fish, go deep sea fishing, and an avid golfer. He was a 50year member of Schenectady Muni, a member of the American Legion Post 2157 and the Rotterdam Elks. Lew was predeceased by his parents, and his siblings, Carmela LaDuke, Charles and Joseph Valentino, Virginia Volpe, Rose Day and Eleanor Bishop. Survivors include, his beloved and devoted wife, of 42 years, Hella Wilhelm Valentino; a brother, Rudy Valentino and his wife Nan, of Schenectady; his sister-in-law Karin and her husband Joerg Gamroth of Spain; nieces and nephews, Frank and Sharon Day, Dominick and Kim Valentino, Dave and Lynn Valentino, Laurie and Jim Powers, Jimmy Valentino; several other nieces & nephews; his Godson Jason Joseph Squires; his special friend, Abigail Ryan and his faithful cat Buddy. Services will be held on Tuesday morning at 9 am from the Rossi & Ditoro Funeral Home, Union at N. Jay Street, then to St. Anthony's Church, Seward Place, where a Mass will be 10 am. Entombment with military honors will follow in Memory's Garden, Colonie. Relatives and friends are invited and may call at the Rossi & Ditoro Funeral Home, Monday afternoon from 4 to 6 pm. Memorial contributions may be made in Lew's memory to the Animal Protective Foundation, 53 Maple Avenue, Scotia NY 12302 or St. Jude's Children's Research Hospital, 501 St. Jude Place, Memphis TN, 38105.

SCHENECTADY &#8211; Lewis, J. Valentino, 91, passed peacefully into the arms of the Lord on Thursday at his residence with his loving family at his side after a long illness. Lewis was born and raised in the Goosehill neighborhood, a son of... View Obituary & Service Information

The family of Lewis J. Valentino created this Life Tributes page to make it easy to share your memories.

Send flowers to the Valentino family.