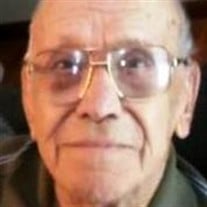 GUILDERLAND - Joseph Pidgeon passed quietly on March 27, 2019 in his room at Daughters of Sarah Nursing Center. Joe was predeceased by his loving wife Helen Battaling Pidgeon, whom he was married to for 62 happy years, his mother Mary and father Louis, his brothers Louis, Ralph, Frank, Tony, George and Donald, and his sisters Anna and Mary. He is survived by his sons Fred (Colleen) and Dennis (Judy), his grandchildren Sean, Tara, Laura, and Erin, and his two great grandsons Griffin and Sage. Joe was born in Schenectady on December 3, 1920. He graduated from Mont Pleasant High School in 1938, and then joined the Civilian Conservation Corps, known as the CCC’s, where he worked for over a year. He always said the building of New York State parks and beaches was an adventure. Joe enlisted in the army and served his country during World War II, where he was a technician grade 5 with the 553rd ambulance company in Fort Jackson, South Carolina and was honorably discharged on November 2, 1944. Joe was also very active in the DAV and was a past commander of the local Vibert O’Fryer Chapter 88 and a New York State Commander of the DAV. During his DAV days he helped at the weekly bingo, where he was a caller. He also headed fundraisers that benefitted local charities and little leagues. Joe was also active in the Rotterdam Little League and Babe Ruth leagues as a coach and officer as his sons played. Upon leaving the service Joe began working at the General Electric Company in Schenectady, New York where he worked for 42 years as a master tool maker. He made parts for the land rover our astronauts used during the moon landings and also made parts for the Carousel of Progress that debuted at the 1964 World’s Fair in New York and now is part of Tomorrowland in Disney World. Joe loved the New York Mets and rooted for them whenever they were on TV. He loved baseball and never missed a game either of his sons played as they grew up. He never criticized umpires but was critical of players who were lazy, or as he said “dogged” it. “Always give your best no matter what” was his motto. Joe will also be remembered at Saint Madeline Sophie Parish in Guilderland as an usher at the 4 pm mass every Saturday, a position he held for over 60 years. He made it his duty to welcome everyone to mass and he made sure they were ushered to the table of God when it was time for communion. The family would love to thank the staff at Daughters of Sarah for the diligent and kind care they provided Joe is his time there. We thank the Green Wing staff, the therapy staff, and the recreation staff, who always went out of their way to make sure Joe knew he was important to them. In Lieu of flowers please send donations to the Daughters of Sarah nursing facility. Calling hours will be Monday April 1st from 10 am until 11 am at Saint Madeline Sophie Parish, 3500 Carman Road, Schenectady, New York 12303. A funeral mass will follow at 11am at the parish. Interment will follow in St. John the Baptist Cemetery.

GUILDERLAND - Joseph Pidgeon passed quietly on March 27, 2019 in his room at Daughters of Sarah Nursing Center. Joe was predeceased by his loving wife Helen Battaling Pidgeon, whom he was married to for 62 happy years, his mother Mary and father... View Obituary & Service Information

The family of Joseph T. Pidgeon created this Life Tributes page to make it easy to share your memories.

Send flowers to the Pidgeon family.