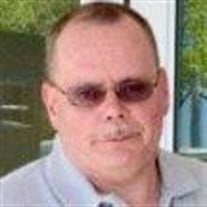 Joseph L. Dunn, Jr., 60, died Monday, August 10, 2020 at SUNY Upstate Medical University in Syracuse after being treated for injuries sustained in a house fire. Joe valiantly fought for his life, alongside an extraordinary medical team. Joe was born in Schenectady and was a lifelong resident of Outer Drive, Rotterdam. He was a 1978 graduate of Notre Dame-Bishop Gibbons High School and attended the University at Albany. With an urge to delve into law enforcement, Joe graduated from Schenectady Community College in 1981 with an AAS in Criminal Justice. Since 1984, Joe has steadfastly served with the NYS Department of Corrections, where he was an honorable safety officer. In addition, for over twenty-five years Joe solemnly upheld his duties serving as a police officer for the Town of Coeymans, Albany County. He truly loved and was proud of the mission “To Protect and Serve.” He was a member of P.A.L. "Police Athletic League". Joe leaves behind his loving sister, Maura (Gregory) Zannitto of Charlton; nephews, Dr. Peter Zannitto of Houston, Gregory (Michael Katz) Zannitto of Manhattan; nieces, Mary Zannitto (goddaughter) of Glenville, Margaret Zannitto of Ballston Spa; and a great nephew, Charles Joseph Zannitto who was born June 9th. Joe is survived by his aunts, Teresa McArdle, Phyllis Dunn, Rita Denny, Cecile O’Connor; an uncle, Daniel (Mary Ann) O’Connor; and many cousins. Predeceased by his cherished parents, Joseph and Evelyn (O’Connor) Dunn, whom he cared for at home until their deaths. His sweet dog and buddy, Kelly, also perished as a result of the fire. Services will be held on Saturday at 11 AM from the Rossi & Ditoro Funeral Home, 501 Union Street, followed by A Mass of Christian Burial at 12 Noon at St. Luke’s Church, 1241 State Street, Schenectady. Interment will follow at a later date in Most Holy Redeemer, Niskayuna. Relatives, friends and fellow officers and colleagues are invited and may call at the Rossi & Ditoro Funeral Home on Friday from 4 to 7 PM. The family would like to express their sincere appreciation to the staff of Albany Medical Center, SUNY Upstate Medical University, Rotterdam Fire Department, Rotterdam Police Department, Coeymans Police Department, NYS DOCS, the neighbors on Outer Drive, and David and Doreen Ditoro of Rossi & Ditoro Funeral Home for their attentive skills and compassion shown to Joe in these last days. He will always be remembered as a very humble man, favoring the simplest things in life: sipping Stewart’s coffee, closely following the news, weather, and politics, giving the most hilarious birthday greeting cards, and his love of policing. Memorial contributions for those who wish may be made in Joe and “his buddy Kelly’s “memory to Mr. Mo’s Project at www.mrmoproject.com, an organization providing ongoing support for dog’s and their foster families.

The family of Joseph L. Dunn Jr. created this Life Tributes page to make it easy to share your memories.

Send flowers to the Dunn family.