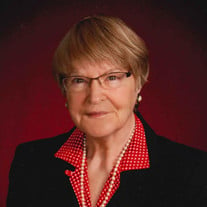 GLENVILLE – Jocelyne Dupont Papa, 82, was united with her Loving God and her beloved husband Robert on Monday, August 10, 2020 at home with her devoted son Marc André Papa at her side. Jocelyne was born in La Tuque, Quebec a daughter of the late Aldori and Rheá St. Martin Dupont. Jocelyne was educated in Montreal and earned a degree in Radiology. She worked in Montreal as an X-Ray Technician until 1953. Jocelyne met her beloved husband Robert 54 years ago on a trip to New York. Their courtship began with Bob making a trips north one week followed by sending a bouquet of yellow roses the next week, continuing until they wed. Jocelyne was gifted with an anointed voice from God. She sang with many musical choruses including the Sweet Adeline’s and was a Cantor at her parish, the Church of the Immaculate Conception, Glenville. Jocelyne was a devoted homemaker, wife and mother. She supported her husband as he worked many hours with his brother Dominick at Perreca’s Bakery. Jocelyne had a shining personality; she lived a full Catholic life, with the heart of a servant; and was a true inspiration to her family, friends and community. She was a member of the Edison Club and an avid golfer She was predeceased by her beloved husband, Robert A. Papa on March 16, 2018 after 52 years of joyous marriage; and her sisters, Murielle Dupont, Gisele Beaulieu and Liette Tremblay. She is survived by her son, Marc André (Jennie) Papa, her loving grandchildren, Lauren (Eric) Lee, Stephen and Allison Papa; brothers, Bernard (Rita) Dupont and André (Marie) Dupont; nieces, Maria Papa and her son Kipling Papa Silveria, Donna (John) DeGeorgio, and their son Ronnie and Sandra (Richard) Wood and their son Dickie; nephew, Tony Papa and his sons Anthony and Nicholas Papa; and many dear friends. Jocelyne’s family is forever grateful to Doreen Hornyak, for her kindness, compassion and dedication in caring for Jocelyne and to Rachael Winters and the Eddie Care Team at Immaculate Conception Church for their many visits, prayers and empathy. Services will be held on Friday at 9am from the Rossi & Ditoro Funeral Home, 501 Union Street, followed by a Mass of Christian Burial at 10 am at the Church of the Immaculate Conception, 400 Saratoga Road, Glenville, with Fr. Jerome Gingras, officiating. Interment will follow In Most Holy Redeemer Cemetery, Niskayuna. Relatives and friends are invited to call at the Rossi & Ditoro Funeral Home on Thursday from 2 to 5 pm. In lieu of flowers, memorial contributions may be made in Jocelyn’s memory to the Church of the Immaculate Conception Building Fund.

GLENVILLE &#8211; Jocelyne Dupont Papa, 82, was united with her Loving God and her beloved husband Robert on Monday, August 10, 2020 at home with her devoted son Marc André Papa at her side. Jocelyne was born in La Tuque, Quebec a daughter... View Obituary & Service Information

The family of Jocelyne M. Dupont Papa created this Life Tributes page to make it easy to share your memories.

GLENVILLE – Jocelyne Dupont Papa, 82, was united with her Loving...

Send flowers to the Papa family.