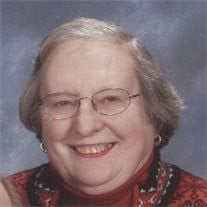 NISKAYUNA - Jean Marie Claps (nee Docteur), 74, of Schenectady, died on February 11, 2011 after a courageous five year battle with cancer. She died gently, at home, surrounded by her family. Jean is the daughter of the late John and Mildred Reff Docteur. She is survived by her husband of 23 years, Michael Claps, two stepchildren, their spouses, and step-grandchildren; Thomas and Mira Claps and their children, Eliana, Alexa, and Jadon of Marion, Iowa and Michele and David Cruz and their children, Nicholas, Luke, and Sarah Cruz of Orlando, Florida. Jean is also survived by three brothers and their spouses, Gerald and Beverly Docteur, of Vestal, NY, Kenneth and Joanne Docteur, of Duluth, MN, and Gary and Cindi Docteur, of Buffalo, NY. In addition she is survived by five nieces and one nephew; Elizabeth Docteur Dennison of Alexandria, VA, Kelli Docteur Zenick of South Lakes, TX, Rose Docteur Boynton of Jamesville NY, Amanda Docteur Hestwood, of Egan, MN, Nicole Docteur Mroczek of Rochester, NY, and Andrew Docteur of Shakopee, MN, along with two grandnieces and three grandnephews. Jean attended the Cape Vincent Sand Bay School (a one-room schoolhouse) graduating the 6th Grade. She then attended the Cape Vincent High School graduating as salutatorian. While in high school she enjoyed band, choir and studied piano. Jean attended Potsdam and Cortland Teacher’s Colleges. During her senior year at Cortland she became ill, requiring her to be admitted to Ray Brook Sanitarium, Saranac Lake, for about a year. While at Ray Brook she developed a life long compassion for those less fortunate and an awareness of the injustices brought upon both the poor and women in our society. While completing her undergraduate studies at Syracuse University with a BA in history, Jean worked for Carrier Corp in its Engineering Library in Syracuse. For a short period she was employed by the NYS Division for Youth, and then became a caseworker for Schenectady County Department of Social Services. In 1966 she took leave and went to study at the University of Hawaii for her MSW. Upon returning to New York she rejoined the Schenectady County Department of Social Services from where she retired in 1987. Jean lived in the Schenectady area most of her adult life. She developed and maintained many loving and caring friendships within this community. She was active with many singles groups especially the Singletarians. She planned socials and went on many skiing and bus trips. Jean was an avid reader, belonging to the AAUW book exchange. She read more than 2,700 titles. She was a communicant of St. Anthony’s Church in Schenectady, for many years. She enjoyed singing Italian hymns each Sunday morning at the 7:30 Mass. Jean was a member of NOW and was enthusiastically active in politics at all levels. She was an active member of the Democratic Party, working on many campaigns. She developed very strong opinions on many topics and her family learned that her opinion was seldom changed. Jean’s mother had instilled in her both the right to an expressed opinion and an insatiable appetite for reading, while her father had taught her an endless compassion for the poor and unfortunate. After marrying in 1987, she joined Mike going “to the ends of the earth” from Tierra del Fuego south to Antarctica, and to the North Cape of Norway north to Spitsbergen. No place was too remote for her. She also enjoyed traveling in Europe and South America where she tried out newly acquired language skills. Not withstanding her worldwide travel her favorite vacation spot was the Docteur family homestead, The Farm, in Cape Vincent overlooking the beautiful Saint Lawrence River. Our family extends a sincere thanks to all those associated with her medical care especially Dr Jaski and Dr Delmonte and a special thanks to the wonderful, caring, nurses at the Rexford office of NYOH. You made her battle with cancer easier. We thank the Niskayuna Fire Dept and Police personal who gently brought her to the Ellis Emergency Room. We also thank the Ellis Emergency room staff. Finally, we thank the Community Hospice of Schenectady who enabled Jean to remain in loving surroundings at this most difficult time. Services will be held Tuesday Morning at 10 AM from the Rossi & Ditoro Funeral Home, Union at N. Jay Streets, then to St. Anthony’s Church, Seward Place, where a Mass will be celebrated at 11 AM. Relatives and friends are invited and may call at the Rossi & Ditoro Funeral Home, Monday from 3 to 7 PM. A Memorial Mass and interment will be held at St. Vincent de Paul Church and Cemetery, Rosiere, NY in the spring. In lieu of flowers, friends are requested to make donations to the St Jude Children’s Hospital 501St Jude Place, Memphis, TN 38105 For more information please visit, www.rossiditorofuneralhome.com

NISKAYUNA - Jean Marie Claps (nee Docteur), 74, of Schenectady, died on February 11, 2011 after a courageous five year battle with cancer. She died gently, at home, surrounded by her family. Jean is the daughter of the late John and Mildred... View Obituary & Service Information

The family of Jean Marie Claps, nee Docteur created this Life Tributes page to make it easy to share your memories.