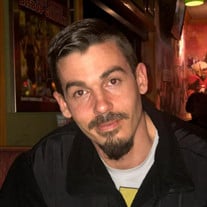 SCHENECTADY – Jamie L. Reilley, 34, of Foster Avenue, passed away suddenly on Sunday, February 6, 2022, at Ellis Hospital. Jamie was born in Albany a son of George Reilley, Sr., and the late Marcy Kowalski Brennan. He was a 2005 graduate of Palm Bay High School, where he was active in the ROTC program. He received an AS degree from SCCC and began his career in his passion of foodservice. Until 2016, Jamie worked his food truck, after which he worked for the Crown Plaza, Johnny’s, and Rivers Casino as a sous-chef. He also worked as a professional Poker Dealer at Rivers Casino. Jamie was a beautiful soul, full of life, and a loving and caring son, father, brother, the best uncle and friend to many. He welcomed everyone with his beautiful smile; was a great host and an amazing chef. Jamie lived for Dominoes and Video Games. He was predeceased by his mother, Marcy Kowalski Brennan. Jamie is survived by his father George Christian Reilley, Sr., a son, Jayden Lee Reilley; siblings, George C. Reilley, Jr. and his fiancée Rachelle Hudson, Ryan Reilley and Ashley Reilley; grandparents, George & Marcia Kowalski and the late Frederick & Elizabeth C. Reilley; his soul mate and co-parent, Esperanza Booker; Liz “The gangsta and partner in crime” Santana and his casino wife, or soon to be ex-casino wife, Ellen Weinstein, his white bromance, Brock Gingell; nieces and nephews, Makyala, Madison, Romeo, Christian, Aiden & Patrick, and Macy Lynn Reilley and Justice Martinez; Naomi, Anna Lynne, and Elena and his Godson PJ Santana; Ivy and Kara Morales; many aunts, uncles, and cousins. Relatives and friends are invited to call at the Rossi & Ditoro Funeral Home, 501 Union Street, on Friday, February 11th from 4-8 pm. Memorial contributions may be made in Jamie’s honor to Gofund.me/7e16e6b8

SCHENECTADY &#8211; Jamie L. Reilley, 34, of Foster Avenue, passed away suddenly on Sunday, February 6, 2022, at Ellis Hospital. Jamie was born in Albany a son of George Reilley, Sr., and the late Marcy Kowalski Brennan. He was a 2005 graduate... View Obituary & Service Information

The family of Jamie L. Reilley created this Life Tributes page to make it easy to share your memories.

Send flowers to the Reilley family.